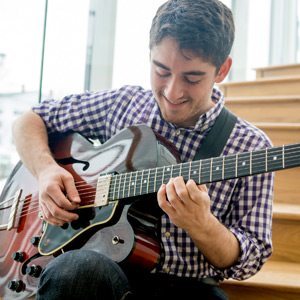 Great Neck native Michael Blum, a jazz guitarist, has released his debut album, “Initiation,” featuring his quartet of Jim Stinnett on bass, Brad Smith on piano and Dom Moio on drums. The song selection includes both jazz standards and original compositions by Stinnett and Blum, whose says that his musical style is heavily influenced by jazz legends such as Grant Green, Red Garland and Wes Montgomery.

Critic and author, Scott Yanow, touts “Initiation” as “a strong debut” and he terms Michael Blum as “a guitarist who will clearly have an important future in jazz…He has an attractive sound, a melodic style, and a thoughtful approach to improvising.”

Blum recorded this album at only 20 years of age, in between pursuing academics at Dartmouth College. A lifelong devotee of jazz, Blum told the Great Neck Record: “From a young age, I was always immersed in music. I was about nine years old when I began studying classical guitar with my father. However, it wasn’t until age 18 that I decided to seriously pursue jazz guitar. One of the reasons that jazz resonates with me is that it embodies the principle of freedom through discipline—the harder you work at it, the more liberty you have to play with abandon.”

For the past year and a half, Blum has traveled over 150 miles on a near weekly basis to study with world-renowned jazz educator and Berklee School of Music professor Jim Stinnett. Says Stinnett: “Michael is one of the most dedicated students I have ever had the privilege to teach, and his dedication is only matched by his innate talent. When Michael’s playing began to take on the characteristics of the jazz greats, it was obvious to me that it was time for us to record.”

Blum said, “I started studying in earnest with Jim, and about a year later, he suggested that we record an album together. Dom Moio, a brilliant drummer and excellent listener, was added to the mix, as was Brad Smith, an extremely sensitive pianist, and thus…the Michael Blum Quartet was formed.”

Over the past few years, Blum has performed extensively at a diverse selection of venues, including Jazz at Lincoln Center and the Hopkins Center for the Arts. He has also collaborated with musicians such as Joe Hunt, Michael Manring and Fred Haas.

“Initiation” is available for purchase on Blum’s website (www.michaelblumguitar.com/shop/) and via other online retailers, such as iTunes, Amazon and Google Play. Initiation is also streaming on Spotify.