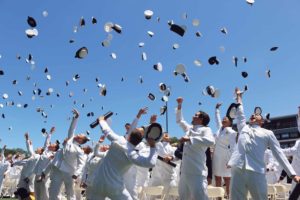 The keynote speaker, Secretary of Defense James N. Mattis, delivered an inspiring message before a crowd of about 4,500, including family members and guests of the graduating class, distinguished visitors representing the federal government, senior officers from the U.S. military, executives from the maritime industry, community leaders, alumni, faculty and staff. He spoke of duty and commitment and implored the graduates to never stop learning.

“You need to be a lifelong learner, so you are as strong when destiny does tap you on the shoulder to lead your crew or team through the rocks and shoals of life as you are today,” said Mattis.

USMMA graduates ensure a steady stream of merchant marine officers who support the nation’s economic and security requirements in times of peace and war. Graduates from this year’s class represent nearly every state, as well as Malaysia and the Republic of Korea.

Rear Admiral James A. Helis, PhD, superintendent of USMMA, encouraged the class to enjoy the day. “Take in this moment,” said Helis. “You’ve earned it.”

He went on to challenge the graduating midshipmen to embrace their leadership role in the future.

“Leading is both a challenge and a privilege. Rise to the challenge. Embrace the privilege,” said Helis. “Go out and lead and change the world. Be the leaders of character that our nation needs, and those who sail and serve with you deserve.”

Distinguished alumnus speaker Captain Nancy Wagner from the Class of 1978, the first class at any federal service academy to admit women, spoke of duty and honor and congratulated the graduates on their commitment to serve.

Valedictorian Matthew T. Pari, of Sarasota, FL, spoke of the value of consistency.

“Here we are. We did it,” said Class President Christian R. Wittendorf, of Granger, IN, as he reflected on the journey of the class.

“All the studying and striving has paid off,” said Wittendorf. “We have come to what every Kings Pointer dreams of and strives towards: the day we walk across this stage into the next chapter of our lives.”

As part of the commencement exercises, 64 graduates were either sworn in as active duty officers in the Army, Navy, Marines, Air Force and Coast Guard, or will be sworn in at a later date. The remaining U.S. graduates will serve as Navy reservists in the Strategic Sealift Officer Program while working aboard deep-sea vessels, offshore supply vessels, tugs, towing vessels and international flag vessels.

Each congressionally nominated graduate received a Bachelor of Science degree, an Unlimited Merchant Marine Officer License from the United States Coast Guard and an Officer’s Commission in the U.S. Navy or other branch of the military. In exchange for their education, each has the option of sailing as a Merchant Marine Officer while serving in the reserves of any branch of the U.S. military or serving on active military duty.