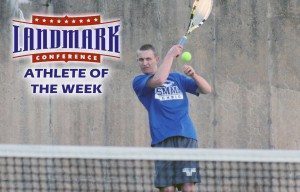 Recently, the Landmark Conference announced its Athletes of the Week and (Kings Point United States Merchant Marine Academy) USMMA sophomore James Hicks (Haddon Heights, N.J.) earned the honor for men’s tennis. This is the second time in his career that Hicks was named the Athlete of the Week, as he also got the accolade back on March 31, 2014, during his freshman campaign.

Hicks was a perfect 3-0 at the #2 spot in singles action in the Mariners’ three Landmark Conference matches this past week. He defeated Drew’s Tommy Butschi, 6-3, 6-7 (8), 6-2, on Wednesday. On Saturday, Hicks handed Juniata’s Matyas Kohout his first conference loss in a three-set thriller 7-5, 3-6, 1-0 (12-10). He wrapped up his perfect singles week with a 6-0, 6-0 shutout victory over Susquehanna’s Matthew Weller.

In doubles action, Hicks was 2-1 with freshman partner Jake McDonough (Wilmington, N.C.). His only loss was a close 8-5 decision vs. Juniata on Saturday. The duo defeated Drew’s #1 doubles flight, 8-3, on Wednesday and Susquehanna’s #1 doubles on Sunday, 8-1. Hicks is on a seven-match singles winning streak and his overall record is 7-2. In doubles, he and McDonough are 5-4.

Up next, the USMMA tennis team is expected to host non-conference opponents Lehman and St. Joseph’s of Brooklyn next week.