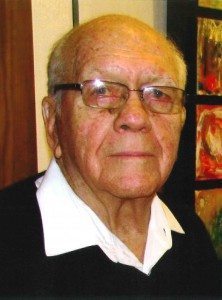 Melvin A. Goldberg, a World War II veteran of the United States Army Air Corps and a member of the Great Neck Veterans Group, has been chosen by the Great Neck Memorial Day Parade Committee to be the grand marshal of this year’s parade, the 91st such annual parade.

The parade and ceremony will be held on Memorial Day, Monday, May 25. The parade will be led by the United States Merchant Marine Academy Color Guards and Band and the Plebe Class of 2015. It will step off at 9:30 a.m., sharp, at Middle Neck Road and Susquehanna Avenue, proceeding north on Middle Neck Road to the Village Green in the Old Village. A memorial observance for those who have sacrificed their lives for our country will be held at the Green at parade finish. The veterans groups and Great Neck fire departments will then march to All Saints Church for a final salute. Two local Boy Scout troops have placed American flags on the graves.

Mel Greenberg is a longtime resident of Great Neck. He is a retired executive from the field of communications and, for many years, was the associate producer of the Veterans Series of Public Access TV.

Goldberg served his country with distinction from 1942 to 1945, received his navigator wings and commission as a second lieutenant in the United States Army Air Corps and flew 34 missions over Europe from Halesworth, England. He received four Battle Stars, the U.S. Air Medal with three clusters and the Distinguished Flying Cross. Goldberg is a retired captain in the U.S. Army Reserves.

The Great Neck Veterans Group has been meeting at 2 p.m. on the second Friday of the month for the past eight years at the Great Neck Social Center, 80 Grace Ave. in Great Neck. New members are always welcome. For further information, contact Mel Sachs, leader and coordinator of the group, at 516-487-0025.