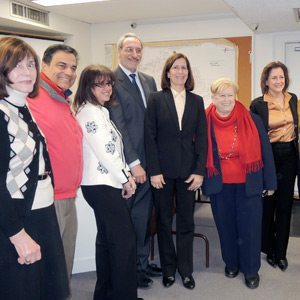 With barely three months representing the people of Great Neck in the Nassau County legislature, Democrat Ellen Birnbaum already has a lot under her belt and is enjoying the experience of “giving back” to her community. Birnbaum, legislator for the 10th District, and long-time fellow legislator Judy Jacobs (D-Woodbury), presented a brief history and a legislative review at last week’s Great Neck Village Officials Association meeting.

Birnbaum serves on several county legislature committees: Government Services & Operations, Finance, Veterans & Senior Affairs, Towns, Villages and Cities, Planning Development and the Environment. Like the legislature itself, the committees meet once a month.

She is quite proud of brand new veterans’ legislation regarding fees. She was stunned to discover that the county leisure pass fees were waived for senior citizens, but not for veterans. A new law allowing veterans to purchase a Nassau County Leisure passport at a one-time rate, as opposed to paying a fee every three years, was unanimously passed on March 24. Birnbaum told how she proposed the law in February, but was told that she would not be successful in enacting the change, due to being in the minority party. She went to the majority leader, Republican, Presiding Officer Norma Gonsalves, and asked her to propose the law. With Birnbaum seconding, the law passed.

At the meeting, Birnbaum told her colleagues in village government that she has been busy since taking on this new position meeting with county departments and working on issues through her many committee memberships. The new county legislator is involved with many projects, including mammogram services and car-seats for children, an issue the Republicans will not vote for, and the ongoing effort to ban smoking in any car when a child is a passenger. “Who could object to that?” someone asked. Birnbaum replied that all battles with the Republican majority are uphill battles.

One and all, public officials at the meeting complained about the terrible potholes that literally line the roads in Great Neck. Several noted that village and town roads have been tended to, but they feel that the county has ignored Great Neck. Birnbaum did say that she anticipates that county projects such as the storm-ravaged roads and the long-promised traffic light at the corner of Middle Neck Road and Brokaw Lane in the Old Village will be addressed as soon as the weather improves. She also announced that there is some money available now for community projects.

Though as a member of the minority party laws are difficult to push through, “I’m there to help you,” Birnbaum assured her fellow officials, many of whom are Democrats.
Jacobs, a former presiding officer now serving her tenth term in the legislature, shares Birnbaum’s frustrations about working with the majority. Jacobs said she is “deeply committed” to the environment and emphasized that to fight such constant battles, “you must really believe in what you’re doing.”

While acknowledging that “there are good people on both sides,” Jacobs said she is baffled by Republican resistance to, for example, a ban on selling cigarettes to those under 21. She said the Republican majority wants to wait for the state to act, but she supports taking action now and “making our own mark.”

In her parting statement to the local officials, the 19-year veteran legislator said it is up to the public to support legislation they want. “We need people to make things happen,” Jacobs said. “We have a lot to lose.”