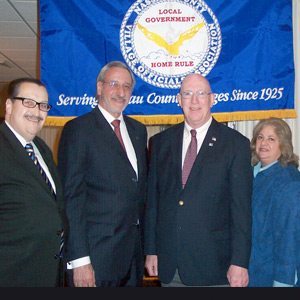 When New York Conference of Mayors President Richard Donovan came downstate last week to learn a bit about Long Island, he enjoyed the tour and said he learned a lot. That same evening, as he addressed the Nassau County Village Officials Association, his tone turned quite serious. Donovan, mayor of the small upstate Village of Minoa, asked for strong support from officials of the 64 NCVOA villages in order to help defeat Gov. Andrew Cuomo’s “convoluted” residents’ property tax proposal.

While Village of Great Neck Mayor Ralph Kreitzman led the Nassau County tour with Donovan, several other Great Neck mayors joined them at the NCVOA dinner that evening.

Donovan emphasized that the issues facing villages are “not about me … they’re about us.” He stressed that Cuomo is definitely not a supporter of local government, that Cuomo “never mentions the word village.” Donovan said that when Cuomo does mention local government he talks of unbelievably large numbers of municipal governments. In doing so, Cuomo is counting special districts, many of which are not separate governments but actually parts of town governments and run by the town. This, of course, really blows the numbers way out of proportion.”

Again Donovan underlined the need for support in fighting this provision of the Governor’s proposed budget. He spoke of the hope that local state legislators, like Long Island State Senator Jack Martins and State Assemblywoman Michelle Schimel, will continue to fight with local officials and residents. Donovan told the audience of local mayors and trustees that their help and support is vital and they must act now. “We do have some champions like Jack Martins and Michelle Schimel,” he said, but he also implored the NCVOA members to urge their residents to call, to email, to send letters to state officials to speak out against the tax freeze proposal.

“You represent a tremendous number of people,” Donovan told his audience. “We are the ones who can bring about change … tell the folks back home.”

Donovan traveled to Nassau County to see some of the villages and to bring the NYCOM legislative agenda downstate, as the many snowstorms this winter kept local officials from traveling up to Albany to discuss the issues at NYCOM conferences. 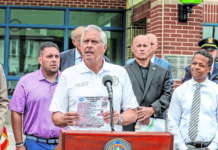