The United Mashadi Jewish Community of America will build a three-story, 74,427-square-foot community center on Steamboat Road, despite concerns from residents that it will be a “potential traffic, parking and infrastructure nightmare,” which was rejected by the Nassau County Planning Commission in December and “mysteriously” reappeared on the Village of Great Neck meeting agenda on Tuesday, July 2, with only a few hours notice.

The estimated $18-million project, housing an auditorium, pool, gyms, basketball courts and meeting rooms for after-school activities and senior programs, would be built on two acres located at 187–195 Steamboat Rd.

Residents expressed multiple concerns about the project, but the board unanimously decided to send the plans to the Board of Zoning Appeals, which pushed the plan forward on July 11.

Original plans prepared by Cameron Engineering and presented to the board on Aug. 31, 2018, have since been modified, reducing the building height from four to three stories above grade, with a cellar level that will walk out in the back, and the total size by 7,000 square feet, following a recommendation from the Nassau County Planning Commission.

1. The maximum height allowance is 30 feet. The original proposed height of 61.7 feet has been reduced to 53.7 feet, still 23.7 feet above the allowable height.

4. The required side yard should not be less than 20 feet. The original proposed side yard was 16.6 feet and has been changed to 20 feet.

Residents expressed concern that they would be impacted by the additional congestion, though people outside the Iranian-Jewish community could not use the facility. Several community members complained that “Traffic chaos is already a nightmare,” and in the summer cars already park down Steamboat Road during events at Steppingstone Park. They wondered how the area could possibly handle the additional traffic and parking for these cars. 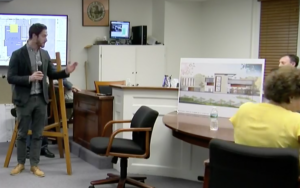 Joe Yacobellis of Mojo Stumer Associates, the organization’s architect for the project, said the building could accommodate more than 1,000 people, but estimated that the maximum occupancy would likely never be more than 490 people.

According to Paul Bloom, the attorney who represents the applicant, while 77 parking spots will be on-site, street parking is also available, though Bloom didn’t think the street parking would be necessary. He explained that additional parking would be available at the organization’s two nearby Steamboat Road facilities and shuttle buses would be provided connecting these locations, bringing people from one location to the other, and that 150 bicycle racks would be installed.

“This is a huge impact on the residents of the village and we have no benefits whatsoever, a lot of us, because we will not be allowed to use it,” said resident Jean Pierce. “You have to be concerned with us, too, who will be impacted by the noise and the traffic and the chaos. And, swimming and basketball and anything else they’ll be playing is not religious, and it should not be taken off the tax rolls.”

Pierce also expressed concern for the safety of young bicyclists on this heavily trafficked road.

The traffic engineer was unable to attend the meeting. Bloom suggested that residents consult the traffic study from September 2018, though community members were concerned about its availability since multiple Freedom of Information Law (FOIL) requests have gone unanswered since February.

“We need to look at what the fiction and reality issues might be,” said longtime resident Rebecca Rosenblatt Gilliar, pointing out the discrepancy between the maximum occupancy of 1,000 to 3,000 people relative to only 77 parking spaces.

“How could you consider that remotely adequate?,” she asked. “You need a much better ratio for parking. What hours and days of the week will shuttle buses run? That’s fiction right now. If you don’t deal with parking adequately on a two-lane road, that’s blunderbuss for the community.”

Rosenblatt Gilliar also expressed her concern about the segregation implications of this new “community center” and how it would have been viewed if such a center were only built for one segment of the population in the South in the ’60s. The community advocate also shared her concern regarding whether the entire property would be taken off the tax roll.

Rosenblatt Gilliar noted that the Village of Great Neck already has 48 properties off the tax roll. In comparison, nearby Great Neck Estates has seven, Thomaston has four, Kensington doesn’t have any and Kings Point has six.

Bloom insisted that there wouldn’t be any environmental impact on air or water quality, due to dry well installation to code and permeable pavers.

Local resident David Zilenziger wanted to know why the public wasn’t informed about this agenda item until hours before the meeting.

“The public wasn’t aware that this matter would be before the board tonight till very late this afternoon,” noted Zilenziger. “The agenda wasn’t even posted until sometime between 3 and 4 o’clock. And the people had no idea that this was going to be heard. Given the concern that residents have raised tonight and the impact on the community, I really think it’s absolutely outrageous that there was no notice, that the agenda wasn’t posted and that it’s all being done very quickly. It looks as though you’re trying to push something straight through and ignore the public.”

The recently reelected Bral responded, “The law suggests no public hearing is needed for site plan. We’re being more transparent that any other village would be.”

Residents said that Nassau County turned it down and they weren’t aware that it was back on the table.

Bral said that before a certificate of occupancy is given, these concerns, like parking, need to be presented in writing. Until they provide everything necessary, nothing will be approved.

After a private board discussion, the mayor asked the applicant how they would provide shuttle service. Bloom said that any reasonable request for shuttle service will be provided.

The board unanimously granted the use, site plan approval and a parking waiver, subject to the applicant submitting a shuttle schedule and valet parking agreement, sending it to the Board of Zoning Appeals meeting on July 11, where the project was approved.

The applicant is scheduled to return to the village board on Tuesday, July 16, with the valet and shuttle agreement, and the board will review the facade and architecture requirements. The meeting will begin at 7:30 p.m.