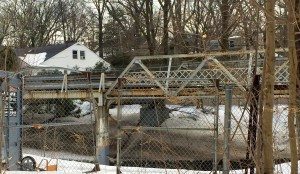 The next event involves the bridge, itself, built in 1897, that connects Colonial Road to Grace Avenue. It’s scheduled to be closed on or about March 30, forcing motorists and pedestrians to find alternate routes. The closure will last for at least a year.

There’s been much debate and concern over the necessity and expense of the pocket track extension over the years, but replacing the old bridge will alleviate fears over the structure’s safety and ability to carry the heavy weights of the modern day cars and trucks that use it.

Village residents whose homes are closest to the construction recently received a letter from a LIRR government relations representative offering to meet with them to discuss the project and additionally offering an inspection of their homes before any heavy construction begins.

While the letter, written by Hector Garcia, estimates that the bridge will be closed through June of next year, Metropolitan Transit Authority (the LIRR’s parent company) press officer Sal Arena was a little more optimistic, stating that it would reopen “on or about April 30, 2016.”

Everything, of course, is dependent upon how cooperative the weather is.

In the letter to homeowners, Garcia wrote, ”We would also like
to schedule a preconstruction assessment of your home’s foundation and surrounding yard…Pictures will be taken to document any pre-existing conditions.”

The letter went on to say, “This survey is intended to provide a measure of protection for both the homeowner and the contractor in the event of any damage caused by the construction.” Garcia also provided a phone number and email address and urged residents to call him to schedule a visit.

The Colonial Road Bridge is more than 100 years old. In addition, the track extension will, according to the MTA, enable “the LIRR to turn trains faster and immediately provide better rush hour service and seat availability.”

The MTA also says that the track work will help support plans to eventually run trains on the Port Washington branch in to Grand Central Terminal.

Thomaston Mayor Steven Weinberg has already met with the LIRR to discuss details of the construction work, according to Barbara Daniels, the Village Administrator.

“He had a meeting with the LIRR (and said that) the inspection of the property adjacent to their work area was merely to ascertain its current state,” Daniels said.

Daniels also indicated that residents would have complete access to any photographs or drawings by contacting Garcia.

“That’s really only for people who are along the route,” Daniels added, referring to properties on Shadow Lane, part of Colonial Road under the bridge, St. George Road, Grace Avenue and the end of Wade Court.

Daniels also said that at the recent board of trustees meeting the mayor reported that the area along side the track near Grace Avenue is currently being set up as a staging area.

“Major construction activities are planned to commence in March (weather dependent) and continue through June of 2016,” said the MTA’s Arena. Those activities will include retaining walls and track installation with switch and signal work scheduled to be completed by the end of 2018.”

Construction work will be confined to weekdays between 7 a.m. and 5 p.m., but some work may be done on Saturdays. “There will be six weekends of track closures where work will take place around the clock,” Arena added.

Railroad Construction Company of Paterson, New Jersey, a company specializing in bridge and track work since 1926, is the contractor. “Between 10 and 50 workers will be on site depending on weekly schedules,” said Adam Schmit, project manager and vice president of Railroad Construction.

Schmit, asked to comment on the MTA’s statement that the project would benefit the local economy by creating jobs, stated, “RCC is a unionized general contractor that will abide by all of the rules and regulations established in the PLA (Project Labor Agreement set up by the owner and local union tradesmen for the project.”