David Spencer, 37, of Freeport was arrested on Wednesday, Nov. 25, for multiple burglaries throughout Nassau County from January through September 2015, according to the Nassau County Police Department.

Spencer hit a string of churches in Roosevelt, Freeport and Baldwin, stealing Yamaha keyboards, cash, a mountain bike, assorted jewelry and ceremonial chalices. According to Freeport Police officers, Spencer was also wanted on burglary charges that occurred in Great Neck on Nov. 11, 2014. 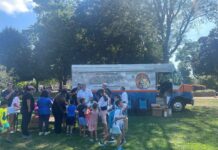 Back To School Backpacks