For the second year in a row, Great Neck’s Special Olympics athlete Erin Lipinsky is the number one individual fundraiser for the Town of North Hempstead Polar Plunge, which will be held on Saturday, March 4, at North Hempstead Beach Park in Port Washington. Brave souls with warm hearts will run, jump and dive into the chilly waters of Hempstead Harbor to raise funds for the athletes of Special Olympics New York during the 13th annual Freezin’ for a Reason event.

“Erin Lipinsky is amazing. He was our top fundraiser for the Town of North Hempstead Polar Plunge last year, raising over $5,000,” said Rebecca Strickland, associate director of development for Special Olympics NY–Long Island. “As soon as the plunge was over, he was excited to get started for 2017.”

Lipinsky has been proudly updating the Great Neck Record almost every day with his fundraising totals and, as of the beginning of this week, doubled his $5,000 goal and raised twice as much as last year, collecting a whopping $10,742.

Each winter, Special Olympics Polar Plunges are held throughout the country to attract thousands of thrill seekers to engage in a worthy and invigorating fundraising event. Last year, more than 6,000 plungers participated, raising more than $1.4 million statewide. In 2015, nearly 600 joined the North Hempstead event and raised more than $60,000.

“The town is always so honored to be able to host the annual Polar Plunge at North Hempstead Beach Park,” said Town Supervisor Judi Bosworth. “It is exhilarating to see so many brave residents take to the chilly waters and raise funds to benefit the Special Olympics athletes.”

This Polar Plunge will help provide year-round sports training and competition in more than 22 Olympic-style sports for more than 65,000 children and adults with intellectual disabilities living in New York, giving them continuing opportunities at no cost to them or their families. 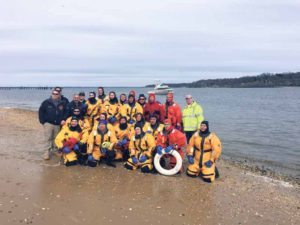 Lipinsky thanks his coaches and the Alert Fire Company for helping him become the top Polar Plunge fundraiser in Nassau County.

“They do a lot for me, helping me out,” said Lipinsky, who held a car wash fundraiser at the Vigilant Firehouse over the summer.

In addition to the fundraising efforts he’s so proud of, this will be his second year going into the frigid water. “I’m doing it for the kids,” Lipinsky explained.

“Every day Erin comes in and tells us how much he raised,” said Great Neck Alert George Motchkavitz, who comes from a long line of firefighters, including his dad and uncle who each served 70 years. “Erin’s gone as far as Syosset, Port Washington and Manhasset. He goes up and down the street with flyers, collecting money. For one Special Olympics athlete to raise that much money is incredible.”

Motchkavitz said that the Alerts befriended Lipinsky 32 years ago when he was just 8 years old. “Three days in a row, Erin walked into the firehouse and said he was having troubles with his little bike. Each day we filled his tire, though there didn’t seem to be anything wrong with it. It turns out that his parents were letting out the air, because they were concerned he was riding in the middle of the street.”

The Alerts talked to his dad and have been encouraging Lipinsky to become self-sufficient ever since. “It’s amazing that this man went out and raised so much for the Special Olympics,” Motchkavitz said. “He takes this very seriously and to heart because he knows that no one else would be helping these athletes. He checks the computer screen every day to see how much he’s raised. It means so much to him. He feels that he has a purpose in life—and he has a heart of gold.”

Lipinsky has been a Special Olympics athlete for the Spirits for many years. “He always wants to be the best,” said Motchkavitz. “Erin thinks it’s important to help out the other kids. You’ve got to have a spot in your heart for Erin, because he has a spot in his heart for the Special Olympics. It made him a better person.”