The Lulav Group of the Great Neck Chapter of Hadassah celebrated the holiday Yom Ha’atzmaut with a gathering of more than 30 women at Great Neck House on May 2. The commemoration of Israeli Independence Day marks the establishment of the modern state of Israel in 1948 and is preceded by Yom HaZikaron, Israeli Memorial Day.

Lulav member Suanne Scherr organized the evening festivities, and Myra Breakstone was the event’s speaker. A resident of Great Neck for 63 years with strong ties to the Hadassah organization and Israel, Breakstone, who recently celebrated her 93rd birthday, discussed splitting her time between Great Neck and Kibbutz Tzora in Israel for 56 years. Her late husband, Dr. Robert Breakstone, volunteered his dental services to the Israelis while she worked in child care. 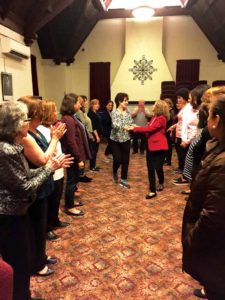 Breakstone also talked about current issues facing Israel and American Jews such as the BDS movement (the Boycott of Israeli and Jewish Products made in Israel or made outside of Israel that directly or indirectly support Israel) and the increase of anti-Semitic crimes on U.S. college campuses. She listed the many accomplishments in Israel in the fields of security, technology and science. She read an email from her son David, who resides in Israel, telling her about the performance by Israeli-Arab singer Nasreen Kadri, who sang at the Day of Remembrance ceremony. Breakstone’s message was to discriminate what we hear in the news, and that many positive relationships exist between Israelis and Arabs.

Attendees were mesmerized by Breakstone, a true gem in the Great Neck community. They were also thrilled that Ruth Mandelbaum and Rita Rubinstein, former members of Herzl and Hadassah leaders, were able to attend this special evening.

Israeli dancing was led by instructor Alan Bloom and the evening concluded with a buffet of beautiful desserts and fruit. To learn about other events or to join Hadassah, contact lulavgreatneck@gmail.com.