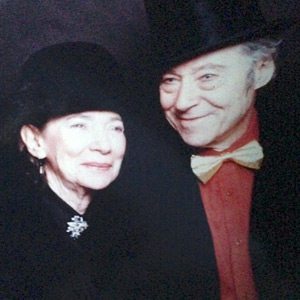 When Edward V. Rieff, a resident of Great Neck for 62 years, died on Jan. 20 after a brief illness, so did Vernon Raphael.

Raphael was the 93-year-old Rieff’s alter ego for many years after his retirement as a beautician in 1985, especially when he performed with his wife, Harriet Rieff, in area libraries, community centers, churches and synagogues and even on cruise ships. Until her death in 2007, they enjoyed lecturing and performing the works of Shakespeare, F. Scott Fitzgerald, Walt Whitman and Emily Dickinson and dressing up as the characters in each piece.

During the years that they performed, they delighted in hiding the fact that they were married and enjoyed the confusion it caused. Many of their friends often referred to Edward as “Vernon.” At one time, he explained the use of his stage name this way: “They pay better when you’re not husband and wife.”

Rieff lived independently in the Old Village, according to his son, Sam, a Rockville Centre attorney. “He lived on his own,” said his son, who visited his father regularly. “He drove his car to the Associated to buy his groceries. He cooked his own food.”

The elder Rieff published a novel 10 years ago, Mussolini’s Millions, a somewhat autobiographical account of his World War II experiences. Rieff served in Northern Africa and Italy as a sergeant and received a Bronze Star for his actions behind enemy lines.

Rieff also loved to write poetry and had many poems published in the Greaqt Neck Record. He also published a book of his poems, Poetry Among The Reefs. Both of his books are available at the Great Neck Library main branch.

His son, Sam, couldn’t say exactly how or when his father developed his interest in writing.
“He was always a creative person,” said Samuel. “He was a sculptor. He was an artist. His sculptures are all over his house and mine. Writing was part of his creativity.”

Referring to his father’s work as a hair stylist in Great Neck, Queens and Manhattan, Rieff added, “Sculpting hair is also creative.”

“He was a philosopher of life,” his son continued. “He imparted to me a love of beauty and nature and taught me that nature was a place where beauty could always be found. I’m going to miss his calm demeanor and his ability to put the care and worries of life in perspective.

The Rieffs were married almost 60 years and have another son, Raymond, and two grandchildren, Adam and Jamie, by Sam. Area residents may also remember Harriet Rieff because she taught English and literature in the Great Neck School District for many years.

“They had a wonderful marriage,” said Rieff of their almost 60 year relationship. “In the parents’ department, I got lucky.”

Services were held at Temple Beth El where the Rieffs were longtime members. Interment was at Mt. Hebron.