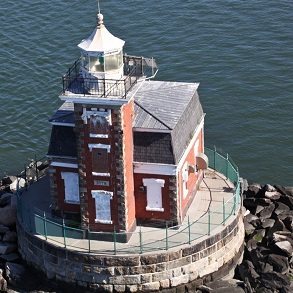 Speaking at the Great Neck Village Officials Association’s last monthly meeting, Kasten reported that several “outside” groups have also joined the efforts. Great Neck’s John F. Kennedy Elementary School has signed on with an “awareness campaign,” holding fundraisers such as grade level contests. And, just recently, the City Island Museum hosted an event, discussing the lighthouse and ways to help.

The lighthouse, visible from Steppingstone Park and the Throgs Neck Bridge, is now in a serious state of decay. Both the roof and the foundation have holes in them and there is decay throughout. A great concern is if it is not saved, the Coast Guard could tear down this historic building and just build a navigational beacon in its place.

Stepping Stones Lighthouse was built in 1876 to warn mariners of a shoal and extensive rocks that extend into Long Island Sound, northward from Kings Point. Built in the Victorian Second Empire style, it was modernized in 1944 and today remains a vital aid to navigation. This one-and-a-half-story, red brick Victorian structure has been guiding ships for over a century. Situated just 1,600 yards from Kings Point and within sight of the Throgs Neck Bridge, the Stepping Stones Lighthouse was built to help commercial ships define a clear channel through the Long Island Sound’s western end, where a collection of rocky reefs lurks beneath the water.

Today, while advances in navigational technology make many lighthouses, like Stepping Stones, considered “surplus” by the U.S. Coast Guard, their value lies in their historical significance.

The lighthouse was awarded to the Town of North Hempstead in 2008 as part of the National Historic Lighthouse Preservation Act. The National Park Service (NPS) serves as the town’s federal overseer for the lighthouse project, with the U.S. General Services Administration (GSA), the entity that manages federal properties, the Great Neck Park District and the Great Neck Historical Society. As part of the lighthouse stewardship agreement, the town agrees to file yearly reports with the NPS, keeping them apprised of any capital improvements undertaken to preserve and restore the structure within its historical
accuracy, and to educate visitors about the lighthouse and its historical significance. In addition, under the partnership agreement, the town will not be providing direct funds for the restoration, but rather will provide in-kind services to assist with repairs and will also seek grants and private donations.

Kasten urged everyone interested to contact the Historical Society to contact her and request a visit to local groups to enable everyone to see what they can do to help preserve the lighthouse and all other Great Neck historical sites.

Anyone wishing to learn more about, or donate to the Stepping Stones Lighthouse Restoration
project, visit www.greatneckhistorical.org/stepping-stones-lighthouse-1.html.