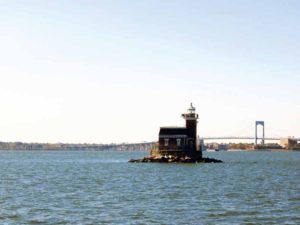 Senator Jack M. Martins has secured $100,000 in state funding for the Great Neck Park District to help restore the Stepping Stones Lighthouse. While this is certainly good news, an estimated $4 million is needed and, so far, only about one tenth of that has been raised for the historic lighthouse, which has been a vital aid to navigation in the Long Island Sound since it first opened in 1877.

“The lighthouse needs so much that this is a very welcome influx of cash,” said Great Neck Historical President Alice Kasten.

“Stepping Stones Lighthouse is both an important, functional maritime safety mechanism and a window back into our history,” said Martins. “It must be preserved for future generations as both a navigational aid and [an] educational resource.”

As legend has it, back in the 1600s, the devil came down from Connecticut, which angered the Long Island inhabitants, who chased the devil out. But, as he tried to get away, he threw boulders over his shoulder to stop them from catching him. While trying to escape, the devil supposedly built a path of stepping stones—like an underwater mountain range—to get away, according to Ronald B. Brinn from the Town of North Hempstead Committee to Restore Stepping Stones Lighthouse.

The lighthouse was built to warn mariners of a shoal and extensive rocks that extend north of Kings Point, and was occupied by a succession of lighthouse keepers and their families, who had to keep the lamp full of oil and the glass continually cleaned.

In 2005, the lighthouse was added to the National Register of Historic Places. The Town of North Hempstead was given ownership in 2008 under the federal National Historic Lighthouse Preservation Act. In an effort to make the rehabilitation a reality, in 2014, the town partnered with the Great Neck Historical Society and the Great Neck Park District in a unique public/private association.

The lighthouse has serious structural damage. Without repairs, the structure is in danger of collapse or being torn down and replaced with a navigational beacon.

The funding will be used to construct safe, permanent dock access to the lighthouse so that critical repairs can begin. Currently, the lighthouse can only be accessed by boat during high tide.

“Right now, there is no way to really land at the lighthouse, and one certainly cannot offload construction materials. So, a dock is a very necessary first step in rehabilitation,” said Kasten.

This past spring, the Town of North Hempstead was awarded a $165,000 National Park Service (NPS) grant to rehabilitate the lighthouse, and is responsible for matching the funding. The ultimate goal is to not only repair the crumbling foundation, masonry, roof and interior damage, but to restore the inside features and create an understanding of the lighthouse’s role as well as the role of its hardworking keepers. Hopefully, one day, the lighthouse will become a museum and educational resource, and groups will be able to visit it to learn about its integral role in the life of the harbor.

To help raise money for the restoration, the Great Neck Historical Society organized lighthouse boat tours for July 10 and Aug. 21 at 1 and 2:30 p.m. each day.

“The boat rides were spectacular,” said Kasten of the July 10 trips. “People were really enthusiastic to see the lighthouse up close. We actually added two more rides, as the Aug. 21 tours are, if not completely sold out, really close to that,” said Kasten, who noted that two trips have been added on Aug. 28. “Of course, now we really need more sponsors to pay for the hefty boat rental for the day,” she continued. “I hope we can get them.”

The Historical Society president also hopes local residents become more involved in the effort toward restoration. “We would like the community to be much more involved than they are, and would love it to be a cause picked up by the residents who can see the lighthouse from their homes,” said Kasten.

For more information or to support the lighthouse, visit the Great Neck Historical Society at www.greatneckhistorical.org or call Kasten at 516-466-8954.