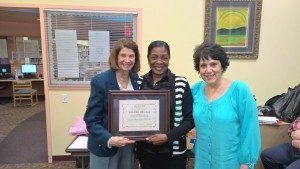 Marjorie wore many hats in her 34-year career at the Great Neck Library. She began working at the library in May of 1981 as a part-time clerk in the circulation department where she was responsible for Talking Books. She also worked part-time clerical hours at the Station Branch and occasionally at the Lakeville Branch. She became full-time in October of the same year. Marjorie also worked in Audio/Visual and Technical Services. She began to work part-time in programming and publicity, and subsequently, when there was an opening, became full-time in the department. In 1999 she left P&P for the director’s office and became the administrative assistant to the library director and board of trustees until her retirement this spring.

Board of Trustees President Marietta DiCamillo said of Marjorie: “I know Marjorie for many years. To describe Marjorie in one word, it would have to be professional. Marjorie prided herself on the job she did for the Great Neck Library, the community and the Board – conducted herself with efficiency, discretion and made her job appear to be effortless.” DiCamillo said that the dedication, loyalty, concern and commitment shown by Marjorie will forever be appreciated and in her heart of thanks.

Trustee Vardac Solomon said Marjorie “…was always there to help us do a good job. Her work philosophy and personality put things into perspective…” Trustee Solomon said she “appreciated always having Marjorie there.”

Marjorie’s dedication and work ethic over her long and productive career at the library will always be remembered.

The library is pleased to welcome Holly Coscetta as the new administrative assistant to the library director and board of trustees, and wishes her much success in her position.