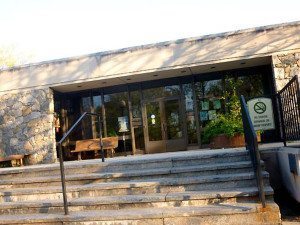 The Great Neck Library construction project was progressing as scheduled with an expected completion date of May 31, 2016, until Verizon went on strike, which will cause a delay in the opening of the renovated Main Library building, according to information released at the Relocation Committee Meeting on April 13.

Working telephone lines are required for all life-safety devices, such as the fire alarm panel and the emergency telephone in the new elevator cab. According to the master project plan, working phone lines were supposed to be operational early next week, immediately followed by the Building Department inspection process, which involves several government agencies. Successful completion of Building Department inspections would have provided the library with a Temporary Certificate of Occupancy (TCO), enabling the computers and communication devices in the temporary trailer to be reinstalled into the building. The TCO is also needed before shelving and furniture can be moved, enabling VRD, the construction company, to complete the remaining interior work.

“We find ourselves with a significant dilemma which is beyond our control,” said Board President Marietta DiCamillo. “The board of trustees will review possible options to get past this hurdle.”

Executive Director Kathy Giotsas added, “It’s a setback, we were on schedule when the strike occurred and were notified by Verizon that our work would not resume before June 1, 2016.”

At the April 13 meeting, two members of the public, who serve on the Relocation Committee, commented on the delay. “We were progressing very nicely, preparing and discussing plans for our imminent return to a brand new library,” said Linda Burghardt. “Personally, I am disappointed to learn of this delay.”

Marianna Wohlgemuth agreed, “It’s frustrating to be so close to completion only to be stopped by an issue we can’t easily resolve.”

Although the completion of the construction process will be on schedule, the actual opening will be delayed until Verizon provides working phone lines. Once the Building Department inspection process begins, the library anticipates that the final project completion will take an additional 30 calendar days. This is subject to change if any additional work is requested that could delay obtaining a TCO.