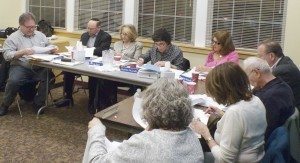 With a proposed 2015-16 budget in place that features only a slight increase, the Great Neck Library Board of Trustees and President Marietta DiCamillo are hopeful of breaking the logjam that has slowed the main building’s reconstruction progress.

“We have been really stymied,” said a frustrated DiCamillo, speaking of the project’s difficulties involving coordinating Verizon and the Town of North Hempstead, after the budget was approved unanimously at a meeting last week.

When the main branch was closed at the end of last October to begin the $10.4 million bonded work, it was estimated that the work would be completed in about a year.

DiCamillo was hesitant to indicate how the Verizon/North Hempstead situation would impact on that estimate. “We can’t even begin a ‘clock,’ due to some factors that are out of our control, until the building can be closed down to be completely renovated,” she said.

“We are through the (asbestos) abatement work,” she explained. “We had additional asbestos discovered which required additional time for abatement and we’re waiting on Verizon to run the lines to the pole for connectivity to our computer system.”

The library is having trouble in getting Verizon to schedule the work. Currently, computer services are run from a trailer in the parking lot.

“It’s a catch-22 situation,” DiCamillo said. “Some of the asbestos that was discovered is unfortunately in the computer room and we can’t get a demolition permit from the town until the asbestos work is completed,” she added. ”We can’t move the computer division out until we get the Verizon lines for connectivity.”

The library’s website (http://www.greatnecklibrary.org/) warns of a coming computer shutdown when the work will actually be done, but understandably lists no dates of interruption.

Despite DiCamillo’s unhappiness with the construction problems, she was pleased with the budget proposal put together by Neil Zitofsky, head of the business office, who’s been with the library for 19 years.

“I think it’s a sound budget with needs assessed and met,” she said. “But we’re still in a ‘quasi-state’ with the building and the renovations.”

A Moody’s Triple A Rating in regard to the bond help the projected budget decrease debt costs by $141,500, according to Zitofsky, who pointed out that the savings would be yearly for the remaining 19 years of the bond.

Reflecting a year in which the main building would be closed for a good part of the year, the employee costs for taxes, benefits and pensions decreased by 11.8 percent.

But the reopening of the building would boost salary costs by 10.4 percent.

The new budget calls for an expenditure of $242,400 for materials and programs, up 37.3 percent. “When we re-open (the main building) we want to make sure our shelves are well stocked,” Zitofsky explained.

Zitofsky went further with his budget preparations than usual in creating a projection of what the budget might be for the 2016-2017 year. Zitofsky estimated that budget, would only be about $7,000 more than the one up for voter approval in May.

“We wanted to have a feeling as to what’s going to happen the following year when we’re reopened for the full year,” he said.

Both the library and school budgets will be on the same ballot on May 19.