Hope springs eternal for local municipalities that have been fighting for permission to continue using the reliable “old-fashioned” mechanical lever voting machines. The new electronic machines that Congress mandated for federal elections a few years ago would be extremely costly for villages, school districts and special districts to purchase or rent. In fact, in some cases it might be impossible for a small village to even rent a new electronic voting machine. 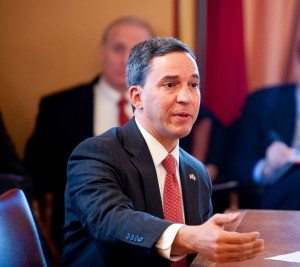 Republican New York State Senator Jack Martins and Democratic State Assemblywoman Michelle Schimel successfully joined forces to push through legislation that will now allow villages, school districts and special districts to continue using mechanical voting machines for an additional year. Twice before the two legislators worked together to push through similar extensions.
Without this bill, local governments and school districts would be forced to purchase or rent electronic voting machines at an exorbitant cost or use paper ballots in conducting their local, non-partisan elections. The legislation also paves the way for a permanent solution to address the problems that have hindered the ability of localities to transition to electronic voting machines.
“Allowing schools, villages and special districts to continue to use lever-style voting machines will help them save money and conduct elections with fair and accurate outcomes,” said Martins, the Senate sponsor of the legislation. “These are non-partisan elections with small voter turnouts, completely different from a regular general election … and need to be treated that way.” Extending this exemption, he said, “will deliver real relief to our schools and local governments.”
Schimel sponsored the bill in the Assembly. “This legislation ensures that the democratic process in non-partisan elections will go forward while the State Board of Elections (BOE) develops solutions to ease localities’ transition to electronic voting machines,” she said. “For the first time, we are putting the government’s feet to the fire by forcing the BOE to consider the fiscal and resource impact of its recommendations on local governments and school districts.” 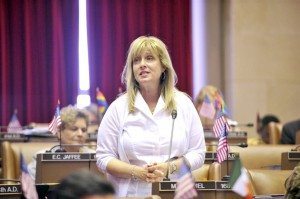 The Help America Vote Act required states to adopt new voting machines in federal elections, and in implementing the Act, New York chose to mandate the use of new electronic machines for all elections. This has proven costly to local governments.
This legislation will extend the current exemption allowing school districts and localities to use lever-style voting machines until Dec. 31, 2015. Additionally, the New York State BOE is required to conduct a report on the administration of elections by villages, school districts and special districts. The bill requires the BOE to take into consideration recommendations proposed by various stakeholders, such as the New York State School Boards Association, the New York State Council of School Superintendents, the New York State Conference of Mayors, and the New York State Association of Counties. The report, which must be submitted to the Governor and State Legislature by Jan. 31, 2015, must include recommendations and guidance to localities on how to transition to electronic voting systems.
The report must also include an analysis of the cost and fiscal impact of these solutions on local governments and school districts.