How are we supposed to revitalize a bedraggled, run-down Main Street? First, promote a sense of community, rather than a collection of disparate groups with conflicting agendas and social norms. Then, get started building community.

Revitalization must be people driven, not developer driven. Revitalization does not need to revolve around mega projects. Mega projects simply generate mega profits for developers—tens, all told, hundreds of millions of dollars. But, they don’t add much to the community. The Village of Great Neck does tax those projects—usually—although mega projects, like Avalon Bay, get tax abatements or PILOTS (payment in lieu of taxes) as incentives to build, while the village continues to pay for services for these projects.

Let’s bring back a farmers market. Do it right this time, and we could have a weekly or bimonthly festival that attracts hundreds of people. Just look across the bay: Port Washington has hundreds of people taking advantage of a community-building shopping experience—a destination—for fresh, local, often organic, fruits and vegetables, artisanal breads, cheeses and specialty items.

Something like this could be tailored for Great Neck customers with shopping days on Saturdays and Sundays to allow people of different faiths to avail themselves of goodies. It could even be tailored with kosher foods and items for all ethnicities.

If we don’t charge vendors anything to set up booths, we could build a destination. We don’t need to make a few bucks off the craftspeople coming to sell their wares who would be doing us a favor by coming. We could vet them and have them register. 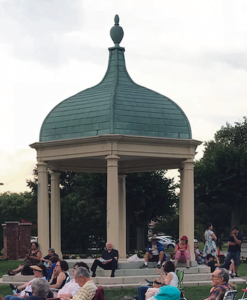 We could do this in the Village Green, working, cooperating and coordinating with the Great Neck Park District.

We could also start a CSA, a Community Supported Agriculture food co-op where people could volunteer to work together—and share the bounty of our wonderful island. We could promote the ideals of sustainable food and community through shared work and food supply. Both of these ideas would require cooperation and coordination with the park district. Why do some people consider this a problem? It isn’t, we are one village and should work together.

We need to cooperate and coordinate with all the layers of government—village, town, county, state and federal—and Transdev, the company that operates the NICE buses, to get an electric shuttle bus up and running.

We don’t need a shuttle to bring people out of the village and to the train, we need a shuttle to bring people to the village—to shop. We should provide this service for free and run it from the parking lot behind Dollar Tree, up Middle Neck Road and down Steamboat Road to the Merchant Marine Academy. We should be bringing residents from Kings Point, all those cadets, and shoppers from Great Neck Estates and Kensington to the village to patronize the businesses.

We need to work with our neighboring villages—and layers of government—to get it done. Let Great Neck lead the country in suburban  green renewal. The park district did it with Transdev and got the Great Neck Buzz up and running.

My favorite falafel is from a kiosk. If you visit Tel Aviv, you should know the falafel from Shlomo & Sons, a kiosk on Nordau, near the beach. We should put together a mini food court with three or four kiosks that provide a multicultural dining experience, offering falafel, kosher barbecue, Chinese dumplings and noodles, and a taqueria that share a public dining space—a glass courtyard with tables—where people eat together, building community.

We should bring in a homemade ice cream shop. People travel for miles to get scoops from Douglas & James in Port Washington, and they shop at stores neighboring the ice cream parlor, which fuels a bustling mini district. Getting a shop into one of the empty storefronts facing the Village Green is a natural fit.

Why not put an arcade in another one of these empty storefronts to attract kids? Yes, I want kids hanging out by the Village Green, spending quarters in an arcade, getting ice cream next door and pizza across the street. It would be great having a thrift shop selling retro and vintage clothes, and a skate/surf shop selling the fashion and gear for that crowd.

One of the miracles of modern society is that teenagers often don’t have jobs, but boy do they spend money. Let them have places to spend it in this town.

We should have a bookshop—with coffee, and art for sale by local artists, live music and tables for hanging out—a place for people to congregate, building community.

The village should make room for a community service–based nonprofit art group, like Art with a Heart in Baltimore. This organization provides classes and jobs to locals as they reach out, building connections to community through art projects for public spaces, among other things.

This inclusion of about 1,000 square feet of raw art studio/industrial space, attached to a new village hall, would not be a cost, it would be an investment—an investment not only as direct support for the arts, but also in values long advanced by Great Neck. The combination of promoting the arts, providing classes and jobs for locals, and making connections with public arts projects to hospitals and other corporate entities is a no brainer as far as a really low initial layout and long-term payback of enriching the community.

Those are the kinds of businesses I would incentivize, not mega projects that cost tens of millions of dollars, but the kind of local stores that build foot traffic and a sense of vitality, of life, that you want on your streets.

Kids riding their bikes into town for ice cream and pizza, hanging out in a park—it’s what happens in villages. It’s what makes villages.

Speaking of bicycles, stop threatening to cut chains and confiscate bikes, and start recognizing that there are people who use bikes to get around, rather than drive cars. These people should not be threatened and criminalized, they should be respected—and bike racks should be included in any master plan. We could add those really cool, sculpture-like modern ones, so they add to the streetscape—and a sense of community, rather than creating a hostile environment for many of our residents.

Complete Streets is a specific program, but even without following its exact protocol, it is time to reenvision Middle Neck Road. This means making people more important than cars, a radical concept with people walking and riding bicycles.

Maybe we should lose parking on one side of the street to create a bike lane. We should absolutely make it easier to cross the street by adding pedestrian buttons that work and more lights. We must work with the county, since Middle Neck Road belongs to Nassau County.

How many times has this administration reached out to any of the bands from North High, which has truly world-class musical groups, from string quartets to jazz bands and choral groups? These bands routinely earn their way to performing at Lincoln Center, Carnegie Hall and Tilles Center. Have any of these groups been invited to perform at the gazebo in the Village Green? We need to cooperate and coordinate with the school district, instead of working at defeating its budget. Music attracts people. People gathering becomes community.

I look forward to the day our neighbors finish their ice cream and then head back to Kings Point, the Estates or Kensington on the free shuttle.