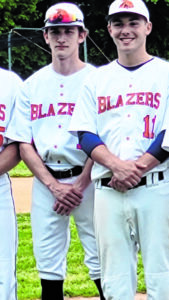 On a beautiful and temperate spring evening, the Great Neck North (GNN) varsity baseball team took the incredibly long bus ride to Long Beach to play their final game of the 2022 season. The Blazers played in one of the toughest divisions in Nassau County this season, taking on baseball powerhouses including Garden City, Mepham and MacArthur. Though often overmatched against these deeply talented and experienced teams, the GNN Blazers fought hard, game, after game and played some of the best baseball seen on the north side of Great Neck in many years.
Coach Kevin Graham sent gold glove shortstop Mike Bornstein to the mound for the Blazers’ final game of the season. Bornstein pitched an extraordinary game, carrying the team on his shoulders for 5-2/3 innings of 2 hit baseball. Craftily mixing speed and location, Bornstein kept the Long Beach hitters at bay, inducing a variety of lofty fly balls expertly fielded by outfielders Zach Ziegler, Jack Kareff and Harry Sheidt.
The infield was manned by Parker Cohen, Aidan Weinberger, Jacob Shakin, Leo Karpel and star center-fielder Adam Ohebshalom. He stepped in to play shortstop and is affectionately known as the best fielder out there regardless of which position he is playing.
The Mariners of Long Beach took advantage of a bloop here and an error there (and one solo homer) to carry a 6-3 lead into the sixth inning. Bornstein kept his squad in the game by picking off a runner at second base as well as expertly fielding a squeeze bunt and flicking the ball to catcher Karpel for the tag play.
After Karpel, Bornstein and Kareff all managed to reach base in the top of the sixth inning, Ohebshalom smashed a bases-clearing double deep over the outstretched arms of the Mariners center-fielder, which dramatically tied the game.
Tied 6-6 going into the final inning, Bornstein finally had run out of gas and was replaced on the mound by Aidan Weinberger, who threw hard but ultimately was touched up for a run in what ended up being a 7-6 win for the Long Beach team.
Nonetheless, there was no shame for the Blazers. The team received a solid ovation from their contingent of family who traveled to the game and from the parents of the Long Beach players, who showed their admiration and appreciation for the great effort put forth by the Great Neck team. It was a fitting end for this group of Blazers, most of whom played together for four years, although one season was lost to the pandemic.
—Submitted by Phillip J. Bornstein, Esq.