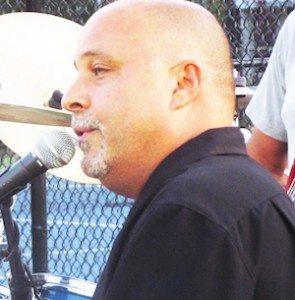 Pat Farrell, clerk-treasurer for the Village of Lake Success, delivered a dynamic performance with his Billy Joel tribute band, Cold Spring Harbor, during the one of the last summer concerts in Memorial Park as part of the Village of New Hyde Park’s Summer Concert Series.

Farrell, also known as the Piano Man, took an audience of more than 200 people on a chronological musical trip through Joel’s recordings in a two-hour show that both the band and its fans visibly enjoyed.

“It’s great to be back in New Hyde Park, my home town. I spent many years here growing up and I raised my family here,” Farrell said.

Farrell’s performance, the latest of many in New Hyde Park as a solo act or fronting Cold Spring Harbor, demonstrated his vocal range and the uncanny similarity between Joel’s voice and his own. The band takes its name from Joel’s first album.

The clerk-treasurer for the Village of Lake Success was recognized for his day job last year when he was elected president of the New York State Association of City and Village Clerks, which gave him a board seat on the New York Conference of Mayors.

Farrell’s connection to Billy Joel grew over the 20 years he’s performed as a professional musician, he said, because his singing voice sounds similar to the Long Island rock star’s voice.

“Over the years, my Billy Joel repertoire grew. People would request songs because I sound so much like him,” Farrell said in an interview last year.

In Memorial Park earlier this month, he and Cold Spring Harbor performed a steady stream of Joel’s classic tunes, including “Just the Way You Are,” “Miami 2017,” “Scenes from an Italian Restaurant” and “Piano Man,” Joel’s first big hit.

Cold Spring Harbor’s performance was the third one in this summer’s concert series, which concluded with the return of local band Marty G and The “G” Men last Wednesday night.

The weather on Wednesday took a cooler turn into 70-degree range
after hitting daytime highs above 90 degrees.

“The weather is outstanding. We ordered it and it came through today,” New Hyde Park Mayor Robert Lofaro told those attending the Cold Spring Harbor concert.

He commended the work of New Hyde Park cultural commissioner Linda Miranda and recreation commissioner Rich Pallisco in producing the concert series and other summer events in the village as he introduced Farrell and his band.

“Volunteers are what this is all about,” Lofaro said.

After his public remarks, Lofaro said the concerts had been well attended, particularly the June 29 performance of Shrek the Musical by Lynbrook-based Plaza Theatrical production on July 29.

Miranda has been serving in the volunteer position as cultural commissioner for the past 12 years, maintaining the summer concert series on a limited budget.

This year’s concert series cost $5,000 to put on, according to Lofaro, who said local sponsors helped to defray the village’s costs.

Village trustee Donald Barbieri is the village board of trustees’ liaison who works with Miranda on the summer concert series and other events.

Farrell has played Christmas and Hanukkah songs during the Town of North Hempstead’s Winter Wonderland exhibit at the Clark Botanic Gardens in Albertson for the past seven years. Farrell has also played for free at the annual Katie’s Run five-mile run in New Hyde Park to honor the memory of young cancer victim Katie McBride.

He’s been working on a second solo CD of original tunes, with no definite release date.

His first solo CD I Got No Place To Be, was in contention for a Grammy Award when it was released several years ago. The album featured Rich Cannata, saxophonist for Billy Joel, on several tracks.