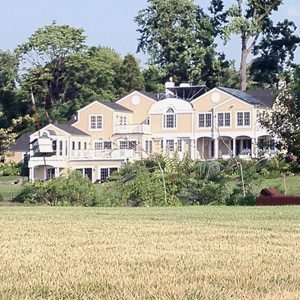 What may be one of the area’s oldest homes has been recognized by the Great Neck Historical Society’s Heritage Recognition Program, which honors notable buildings in Great Neck. The house, at 200 Grist Mill Lane in the Village of Saddle Rock, is currently owned by David Schwartz and Lori Beth Horowitz, and has a long and storied past.

The house, which faces Udall’s Pond, is adjacent to the Saddle Rock Grist Mill. The grist mill was constructed from equipment brought from England and was operating before 1700. It ran continuously until early 1940, producing meal and flour made from corn and wheat grown by local farmers. The sloop James Udall and other boats came right up to its door and loaded excess grain and flour, taking it to New York City to be sold. The names of some of the ships that utilized the mill were carved into the timbers of the mill and are still visible today.

While the home at 200 Grist Mill Lane may be long on history, it is short on reliable documentation. Nassau County lists the house as built in 1790, while another document puts the official date as 1928. One real estate sales record says the house was 100 years old in 1951, another says it was built in 1921, while a third gives the date as 1928.

This Is Great Neck, a history of the community published by the League of Women Voters in 1975, indicates that part of the old Allen homestead can be seen at 220 Grist Mill Lane. The book’s description of that house, as a “marvelous rambling building graced with scalloped shingles,” almost certainly describes the structure at 200 Grist Mill Lane, but no historical verification is provided. The current owners, who enlarged and remodeled the house, report details such as tongue-and-groove paneling, a stone basement, and seashells in the foundation that would indicate older construction.

There is an old jail cell and a water well in the basement, and a brick smoke house in the rear yard that had a double-sided fireplace, but was so old that the fireplace turned to dust.

Louise Udall Skidmore Eldridge inherited the mill and surrounding area from her wealthy family. She married Roswell Eldridge, and their 400-acre estate, known as Redcote, became the Village of Saddle Rock in 1911 when the Eldridges applied for incorporation. It was the first village on the Great Neck peninsula, and Roswell Eldridge was its first mayor. Most of the 77 residents who lived on the estate in 1911 were either related to the Eldridges or worked for them. The Eldridges were philanthropic community activists, founding the Great Neck Library, the Park District, and the first arts center. Louise succeeded Roswell as mayor after he died, and in 1926 was officially recognized as the first female mayor in New York State.

Because the Village of Saddle Rock was essentially the private property of Louise Udall Skidmore Eldridge and her husband until her death in 1947, it is difficult to locate any information about 200 Grist Mill Lane. A 1949 deed transfers the property, “with the buildings thereon erected,” by Louise U. Eldridge’s executors to James Crosby. At that time Grist Mill Lane was a private drive. According to real estate records, the owner in 1951 was Robert A. Curry, who sold the property to Jay and Reva Kramer in 1953. The current owners purchased the property from the Kramers in 1996.

Research about the house was done by Joan Wheeler and Leila Mattson, who coordinates the Historical Society’s Heritage Recognition Program. Great Neck Historical Society President Alice Kasten presented the current house residents with a plaque, which was placed outside the structure. It reads: “Home of Former Udall-Skidmore-Eldridge Estate.”

The Historical Society’s Heritage Recognition Program recognizes structures and locations of interest to Great Neck of architectural, historical or cultural interest. In addition to homes, the Society has recognized buildings such as Great Neck House and the Village School, and looks forward to honoring apartment buildings and stores, among other places. Locations recognized receive an oval dark green Recognition Plaque with etched bronze gold-tone metal describing the property, suitable for mounting on the outside of the property. The plaque was designed by Patricia Schneider Design Consultants of Great Neck.

Homeowners also receive a certificate describing the history of the location. Structures are also listed on the Historical Society’s website, with explanations of their significance.