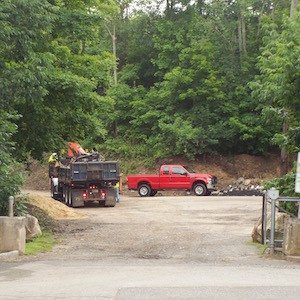 Even though the courts ruled unanimously in his favor over a year ago, Great Neck resident Dan Capruso, who lives just outside Kings Point Park, remains very much concerned over the Village of Kings Point’s continued attempt to gain legal control over 1.56 acres of the park for nontraditional parkland use.

Last June the State Court of Appeals ruled against Kings Point’s use of the land, despite the village’s argument that since it had been using the land for over 60 years for purposes such as storing construction materials and storm debris and had constructed two sheds on the property, the statue of limitations had expired.

The property entrance is on Kings Point Road, across from the Merchant Marine Academy’s baseball field, only a short distance away from the Kings Point/Village of Great Neck border.

Recent requests by the village made to State Assemblywoman Michelle Schimel (D-16th Assembly District) and Senator Jack M. Martins (R-7th Senate District) to sponsor legislation to gain that control has caused Capruso to become even more adamant over the possible land transfer (referred to as “alienation”).

Capruso’s main concern is that the forest on that land, which actually covers about 5.4 acres, is unique among the park’s 173 acres, and if trees were to be torn down, it would take an estimated 100 years to regrow them. The Great Neck Park District has a long standing leasing arrangement with Kings Point for approximately 167 of those acres, none of which are among the acres in question.

Forest ecologist Susan G. Letcher, an assistant professor at Purchase College, said in a 2012 report: ”This 5.4 acre section of parkland is an irreplaceable habitat. There are no other remaining stands of forest in the region with trees of this stature.”

The thing is,” explained Capruso, who is a neuropsychology professor at the New York City College of Technology, “the canopy there is different from the rest of the park.” He says that a great deal of the park is actually reclaimed swamp land and that root systems there are not as deep and that makes large tree growth difficult.

Capruso has been fighting against Kings Point’s efforts for over seven years since neighbor Elizabeth Allen alerted him to the presence of surveyors in the park. Capruso and Allen, along with Alan Berkower and the late Julian Kane, brought the original lawsuit. They were soon joined by the state attorney general’s office in their legal actions.

Capruso says that the village wants to cut down many trees and put up a new public works building, replacing the one currently standing at Sunset Road and then sell the property there for development. That property is adjacent to Steppingstone Park’s parking lot.

Schimel introduced an Assembly bill earlier this month that would grant the village the legal right to use the 1.56 acres for industrial purposes. The village has revised its land request, down from the original 5.4 acres.

The bill won’t come up for consideration until early next year. Similarly, Martins has been asked to sponsor Senate legislation but he has not done so as yet. Kings Point would need both Houses to pass the bills and subsequent approval by the governor to legally use the 1.56 acres.

Stephen Limmer, Kings Point’s attorney, was asked to comment on Capruso’s contentions about what the land would be used for and what would happen at the Sunset Road site.

“The board’s going to have to look at it again because now it’s a smaller (by almost 70%) piece of property,” he added. Things may have changed since 2007 when it was planned. Predicting the future is not easy.”

Should the legislation be passed, the village would be required to “replace” the land that is taken by supplying other land equal in size and value to be used as parkland.

The village is considering setting up a waterfront area on East Shore Road as a passive park where fishing, boating and walking would be facilitated.

“The village would acquire that area…and make it a beautiful waterfront area,” Limmer said. “It could be a beautiful entrance to the village.”

Capruso doesn’t feel that making a waterfront area on East Shore is feasible and worries about what will happen to the 1.56 parcel in question.

“Basically,” he said, “you’re going to have an eyesore where there’s now parkland.”

Capruso sent an email to both state legislators urging them not to support Kings Point’s request for legislation, calling the plan “a clear abuse of parkland alienation (transfer), which is not intended to free up municipal land for sale to private developers.”

He also criticized the plan for the waterfront park on East Shore, citing difficulty in parking, extremely shallow water at that end of Manhasset Bay and its close proximity to a sewage treatment plant as some of the reasons why the proposal is inadequate.