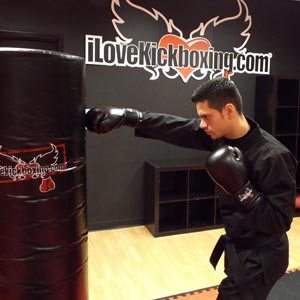 A unique kickboxing weight loss program for adults and an attractive martial arts program for children, has given Gold Martial Arts of Great Neck/ilovekickboxing.com early success in its first year and a half of operation.

Anderson Alvarado and his brother started off their programs in their original location in Glen Cove in 2006 and then decided to branch off in Great Neck with Anderson taking the lead at the 713-715 Middle Neck Road site. Anderson’s brother, Hender, continues to run the Glen Cove site.

Regarding the weight loss program in Great Neck, which now has 166 members, Alvarado said: ”We’ve got a lot of students who have lost a tremendous amount of weight. My philosophy regarding kickboxing and weight loss involves keeping people motivated. Most people don’t like working out. But the program we have here creates a very friendly environment.” The ilovekickboxing.com program is part of a nationwide and worldwide franchise.

Alvarado points to the success of one of his students, Debra Nodiff of Port Washington, as an example of the effectiveness of the program. Nodiff has lost 32 pounds through kickboxing in seven months. Nodiff works out two to three times a week.

Equally popular is the children’s program that runs each day after school. There are currently 75 youngsters participating. “Many parents enroll their kids thinking martial arts is simply self defense,” Alvarado said, who holds a black belt in karate. “They’re happily shocked to find that their kids are learning incredible life skills too. Our program helps children develop confidence, respect, courage and discipline.”

He also says that his martial arts classes don’t require children to be athletic. “It’s kind of a beacon of light for kids who don’t fit into team sports,” he says. “Kid who never could throw a ball well or run fast find martial arts is accessible to them.”

“We have classes for kids as young as three and for teenagers, too,” he added. “Martial arts is the kid of thing that grows with you. So, as kids get older, they learn new techniques, perfect old ones and advance.”

Gold Martial Arts has also become a popular spot for children’s birthday parties. “Birthday parties are really amazing, “ said Alvarado. “Every month I have five or six parties and we offer many different packages.”

“We engage people as much as possible,” said Alvarado in further explaining his weight loss program. “The classes are more fun than any other kind of workout. We start with 15 minutes of strength training and conditioning using calisthenics. We mix it up a lot and that keeps people interested. We follow that with stretching and flexibility exercises.”

“We get people talking and engaged with each other,” he said. “It’s a family. Everybody knows each other. Each class has ten to 15 in a group. The bag work is next and that lasts about 20 minutes.”

“The difference between this kind of kickboxing and aerobic kickboxing is that we’re actually using real-life boxing equipment like punching bags and gloves and hitting the bag, using the whole body,” he added. “After that we have cooperative drills. Everyone has a partner. Then there’s a ‘cool down’ where we give each student fitness tips.”

“Kick boxing helps so much with strength and conditioning as well as with bone density, besides losing weight,” Alvarado emphasized. “My students get a great workout and have fun in the process. One of my oldest students is 71.

He’s here regularly. We even have a women’s only morning class on Tuesdays and Thursdays. Kickboxing is for all ages. We believe that anyone can succeed in any of our programs.”