As the Great Neck Record continues with a new summer special, an update of all nine villages on the Great Neck peninsula, this week we feature the small, quaint Village of Thomaston. Mayor Robert Stern was delighted to talk about his village, proud of the solid, stable community he so carefully watches over and enjoys. 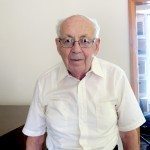 “Not much new here, really, just the roads,” he told the Record. Stern’s “big news” most definitely centered around the road work, a favorite topic with this mayor. Serving as mayor for 19 years, Stern started out with great concerns as to how to run a village, what will it cost, what are the most important jobs of a mayor, what should he focus on?
When he heard that a major road replacement project was underway, and included a huge bond, Stern thought that was “wrong.” And so he began a long course of research and study to learn about roads, inform his department of public works staff and find a way to “do it ourselves.” Today, there is a road replacement project in Thomaston. Stern has hired a contractor (“we pay cash, no bonds”), but up until now, the village crews have been able to do all of the patchwork by themselves. “We’ve saved the village so much money,” he said, with such pride.
As with many of the local villages, Thomaston is also seeing “housing sales booming.” The mayor said that today many “older people” are leaving, some going off to nearby apartment and townhouse housing complexes. Are the buyers tearing down beautiful older homes? Although that has been happening often all over the peninsula, Stern said that most new buyers in Thomaston are altering the houses, not tearing them down and rebuilding.
There are hardly any businesses or stores in Thomaston, Just a few on Northern Boulevard, but these are generally mostly small businesses and no news there. However, Stern did state that he “keeps on top of everything” in his village. He knows what’s going on and he jumps in when his help is needed.
Thomaston Village Hall is at 100 East Shore Rd. 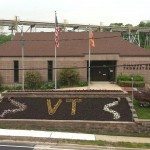 In addition to Mayor Stern, Steven Weinberg serves as deputy mayor and trustees include trustees Gary Noren, To-On Pang and James Sharkey.
Stern, who has lived in Thomaston for 63 years, raised his family here and saw grandchildren raised here, plans to continue to help and guide his residents. “I’m a hands-on mayor,” he said. “I’m ready to act … I do the best I can for this village.
But, in general, Mayor Stern said, as usual: “All’s quiet in Thomaston.”