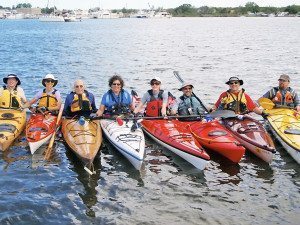 The North Shore Kayak Club begins its 12th season with an organizational meeting and club information session on Tuesday, May 17, at 7:30 p.m. on the top floor of the Port Washington Public Library in the Hagedorn Room.

In describing the organization, Club President Alan Bergman stated, “We are recreational, flat-water (as opposed to white water), adult kayakers who thoroughly enjoy the social camaraderie and physical exercise of paddling together as a group. We are experienced kayakers who enjoy the beauty and serenity of our local waterways. Almost all of our members own either recreational or touring kayaks, as well.”

The club began in July 2004 as the Twin Pines Kayak Club in Port Washington, with semiweekly paddles held primarily on Manhasset Bay. As the group evolved, attracting members from Manhasset, Plandome, Great Neck, Roslyn and Queens, it was renamed the North Shore Kayak Club. Paddles are usually held twice a week from June through November, including evening paddles most Wednesday nights.

Like a professional sports team, the club has a combination of home and away events. Home paddles typically start on Manhasset Bay, while away paddles can occur in places like Stony Brook Harbor, the Connetquot River, Little Neck Bay, the Hudson River in Westchester County or the Mohawk River upstate. Strict water-safety guidelines are adhered to on every outing.

The club also makes a conscious effort to give back to the community each year and feels it’s important to be good citizens as well as safe paddlers. Some of the group’s efforts include volunteering at the annual Port Washington Third Grade Model Boat Regatta, helping out as spotters at the Community Chest Kayak Run and participating in an annual beach cleanup organized by the American Littoral Society.