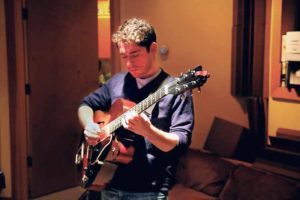 At 21 years old, most young adults are in the middle of their college experience, finding themselves and their true passions in the midst of papers, parties and finals. Great Neck native Michael Blum was still at Dartmouth College at 21, but he was also debuting his first album, Initiation. At an age when most are still not sure of who they’ll be or what they’ll do, Blum was described by critic and author Scott Yanow as “a guitarist who will clearly have an important future in jazz.”

Two years later, it looks like Blum has begun to fulfill Yanow’s prediction. At the tender age of 23, he recently released his third jazz album, Chasin’ Oscar: A Tribute to Oscar Peterson. Although he studied both music and cognitive science in college, playing music has always been—and remains—his true passion, and has clearly become his career of choice. 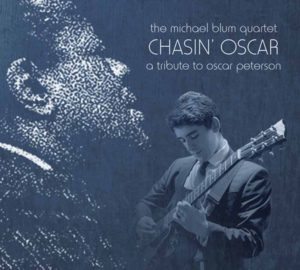 Blum surrounded himself with music in both Great Neck South Middle School and North Shore Hebrew Academy, performing in plays, musicals and jazz band, but he was exposed to music much earlier in life, and started to play and master instruments as a kid.

“I started playing piano when I was probably six, and then I moved onto alto sax around eight and, around 10 years old, I started playing classic and then electric guitar,” Blum said, attributing his parents as the biggest influences in his life, as his mom and dad are a vocalist and a classical guitarist, respectively.

Perhaps growing up with talented musicians helped Michael Blum mature quicker in both his life and his music. Besides creating three albums at such a young age, Blum has collaborated with jazz and classical luminaries like Eddie Gomez, John and Jeff Clayton, and Gary Karr; studied with his mentor, Berklee College of Music Professor Jim Stinnett, on his second album, Commitment; and was once described by Vingage Guitar Magazine as “a player who seems wise beyond his years.”

It’s easy to understand the depth of Blum’s skill and passion for jazz music when listening to songs from his latest album Chasin’ Oscar. For those who don’t know much about the jazz scene or its players, Oscar Peterson was an internationally renowned Canadian jazz pianist and was considered one of the “greats,” with a career lasting more than 60 years that included eight Grammy Awards and hundreds of recordings.

When asked why Blum chose to do a tribute to Peterson, he explained, “I had the chance to listen to him a lot on car rides, and I started to listen to his music a lot, and he really is a master of his instrument. And, because of that, he was able to emote, as if seamlessly, as if there was a direct connection to him and his instrument…he could play aggressive or mean or soft or sentimental…just listening to him is powerful and I realized that I wanted to do what he did.”

Blum attempted to do just that, and it was a long and arduous process translating Peterson’s piano with his guitar. Blum would listen to a song, one section at a time, and have to figure out how he could play it on the guitar before he could move on to the next tiny segment of the same song.

“Each little phrase could be a day’s work,” he said. It was a full-time job. Blum transposed Peterson’s songs from piano to guitar, note for note, for approximately a year before the album was finished.

For both jazz aficionados and those who don’t know much about the genre, Blum thinks that these songs will appeal to many people because, he said, “Oscar Peterson made very easy-listening music, jazz for the general public…it’s all music that feels great, feels good.”

Meanwhile, Blum has been pursuing an active career playing music around Boston, where he now lives, and already has plans to tour around the country one day, and then the world. He also wants to start working on his fourth album, in which he hopes to explore jazz fusion and make it edgier, and possibly even record some original songs. Judging from what he’s been able to do so far, it’s clear that he will do all this and much more in the near future.

Chasin’ Oscar: A Tribute to Oscar Peterson is available on iTunes, Amazon and Spotify. To keep up with Michael Blum and his career crescendos, visit www.michaelblumguitar.com.