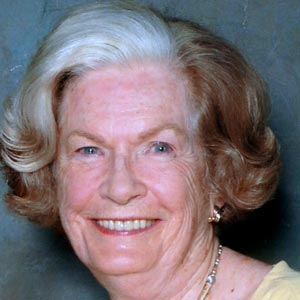 Janice Hawley Kopf died at Duncaster Retirement Community in Bloomfield, CT, on Friday, July 19, 2013.  The daughter of Isadel Goodroad Sedgwick and George Alonzo Sedgwick, Janice was born Sept. 27, 1918 in Storm Lake, Iowa, The family moved to Des Moines where she attended Theodore Roosevelt High School and Drake University.  At Drake she was a member of Kappa Kappa Gamma social sorority; Zeta Phi Eta, professional speech arts sorority; and Pi Beta Epsilon, honorary radio fraternity. She worked part time at WHO, the 50,000-watt Des Moines radio station where Ronald Reagan was the sports announcer, and she played a lead in a serial soap opera that was tried out there.  When the show went national it took Janice with it to play the part on NBC in Chicago.

Summer stock followed and Janice went to New York to try for Broadway. There she met Rollin James Hawley, who was in school to become a U.S. Navy ensign. They were married April 5, 1941 and had six children.  She was predeceased by her daughter Joy Ann Hawley and her son Mark Taney Hawley. Surviving children are Rollin James Hawley, MD, of Dublin, VA; George Sedgwick Hawley, Ph.D., of Harrison, NJ; Joseph Sedgwick Hawley of Norwalk, CT; and Mary Hawley Eddy of Amherst, MA. Mark’s widow, Colleen Hawley, resides in Covington, LA.  Janice also had 13 grandchildren and six great-grandchildren.

While residing in Great Neck from 1949 to 2005, Janice held volunteer positions in the Red Cross; adult education; Senior Citizens; Community Organization for Parents and Youth; chairperson of the Great Neck Cotillion, where 250 high school students yearly learned ballroom dancing; and president of the Woman’s Club of Great Neck for two years when it had 500 members. There she acted and directed in the Drama Group, and she also participated in plays at St. Aloysius Church in Great Neck. Janice was social director of the United States Merchant Marine Academy for eight years until she left to marry Rudy Kopf in 1983. In 1984 she was featured in the Great Neck Record in its series on the “Grandes Dames of Great Neck.”

Services were private, and burial was in All Saints Church Cemetery in Great Neck. A reception was held at Duncaster. Donations may be made to St. Aloysius Church, 592 Middle Neck Rd, Great Neck, NY 11023-1217.