When Ivar Segalowitz died last week, the Great Neck community lost much more than just one really lovely neighbor. Segalowitz died on Tuesday, June 24, following a long illness. He was 83 years old.
A longtime Great Neck resident, he treasured his family and extended his sincere kindness and his dedication to working hard for others. In earlier years he had served as president of the Allenwood Civic Association, and until just a few years ago he was a commissioner for the Great Neck Park District. 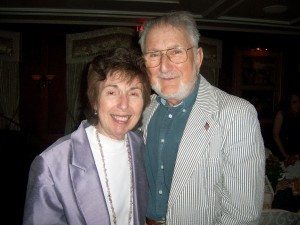 Segalowitz and his wife, Bernice, married for 60 years, moved to Great Neck in 1964 and raised their children Ralph and Eugenie in the community. A Holocaust survivor, Ivar was born in Lithuania and lived through the horrors of World War II. A child survivor of Dachau, Auschwitz and Buchenwald, he was eventually liberated by Patton’s Army.
In 1947 he emigrated to the United States, living in New York City and working as a tool and die-maker, machine designer and manufacturing executive. A U.S. veteran of the Korean War, he married Bernice and went on to study (nights at CUNY), attaining a BS in Physics. He then began a career in engineering and manufacturing, serving as vice president of two firms. He has six patents to his name.
His son Ralph told the Great Neck Record that his dad “rarely talked about the concentration camp.” It was only in later years that Segalowitz began to “tell his story,” occasionally opening up to others, including an interview with the Record many years ago. Working quietly, he was a board member of the Tietz Nursing Home in Queens, a facility dedicated to serving Holocaust survivors and he also served on the board of the National Association of Child Holocaust Survivors. During that interview with the Record, Segalowitz spoke of his bitterness towards other survivors who would not use their talents or their names to help raise funds for fellow survivors.
And while Ralph lovingly spoke of how he and his father spent so much time together, sailing and biking, he said that his father was the one always planning special family times with Ralph and his children and Eugenie and her children.
“He was a one-of-a-kind guy,” said Ralph Segalowitz. “We had a very good childhood.”
Ivar was an active community participant, first as a strong Allenwood advocate and then as park commissioner, a post he held from 2003 to 2011. Park District friends will remember him as a very active participant in all Park District facilities and programs. As an avid sailor, he was often at Steppingstone Marina. You would have been likely to have spotted him bike riding through Great Neck or perhaps you would have seen him speed-skating at the ice rink. He also loved hiking and cross-country skiing in Kings Point Park.
With his strong mandate for this park position, fellow commissioners said that he “helped bring a tremendous engineer’s perspective, leading the district into undertaking a major co-generation project at Parkwood,” which resulted in great energy-saving costs.
Segalowitz served as grand marshal for the annual Great Neck Memorial Day Parade in May 2011. He was indeed a “grand man.”