Senator Elaine Phillips, along with the Gold Coast Arts Center, hosted a celebration for the 70th anniversary of the State of Israel on Thursday, May 24. The festivities featured arts, music, food and literature. The highlight of the evening was a book signing and discussion of Lioness: Golda Meir and the Nation of Israel by Francine Klagsbrun, the winning author of the National Jewish Book Council Book of the Year Award.

The event began with a cocktail hour, where members of the community mingled, had the opportunity to speak directly with Phillips and Klagsbrun, view the center’s art, listen to the live music and purchase a copy of Klagsbrun’s book.

Cocktail hour was followed by a speech from Phillips, in which she spoke on the importance of women’s roles in government, literature and the arts. Comparing Klagsbrun to the titular persona of her book, Golda Meir, the senator called them both pioneers in their respective fields—and years ahead of their time—who paved the path for more women to follow.

Phillips also spoke of her connection with the State of Israel and her goal to keep a strong bond between New York State and Israel. The senator mentioned the achievements of Israel during the last seven decades, irrespective of its current political climate; moreover, the senator’s speech celebrated arts and culture above anything else.

The night’s main event was a speech and discussion by Klagsbrun, during which she offered insights into the massive amount of research and passion it took to write her award-winning biography. The already-established author was approached by her publishers to write the biography and began a 10-year journey into Meir’s life. 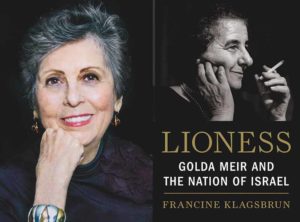 Meir, the first and only female prime minister of Israel and the only woman to serve as the minister of defense, was a complicated and controversial figure who is now seen as having been overlooked by the Jewish community during the past few decades.

Klagsbrun’s biography was written to celebrate the achievements Meir made, despite the many hardships in her path.

The author was able to trace the many events in Meir’s life that could have stopped her from becoming the figure she was.

While conducting research about the prime minister’s personal life, Klagsbrun developed a relationship with Meir’s children. The high demands of Meir’s job caused her to be away from her children, leaving them for months at a time.

In an interview with Barbara Walters just after she left office in 1970, Meir spoke about the strain her relationship with her job had left on her children. Years later, Klagsbrun revived this part of Meir’s history, and through the relationship she developed with Meir’s children, was able to uncover the fact that over time, Meir’s children were able to gain a newfound respect for their mother and her work ethic, revering her efforts rather than disregarding it like they had done in the past.

Klagsbrun was able to uncover such small pieces of information about Meir’s life that would have otherwise gone unnoticed by the world. She was even able to find the laundromat Meir went to. Her dedication to truly delve into the world of Golda Meir was what made her biography so explicit and filled with detail.

At the end of her speech, Klagsbrun answered questions from the audience, mainly about Meir’s controversy. Even in the audience, there were mixed feelings about Meir; however, everyone held Klagsbrun in high esteem. During the book signing, guests were thanking Klagsbrun for her dedication to the community and the celebration.