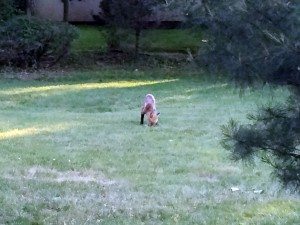 With recent “wild animal” sightings on the Great Neck peninsula, there is a great deal of concern, and fear, over just what animals in roam Great Neck. While the return of deer once again causes no issues, the question of whether residents are seeing coyotes or the indigenous red fox in the neighborhood has become a highly controversial topic. Last month’s Great Neck Record front page article on the possibility of coyotes coming to Great Neck, accompanied by Nassau County safety tips concerning that possibility, brought coyote concerns, and possible sightings, to the forefront. 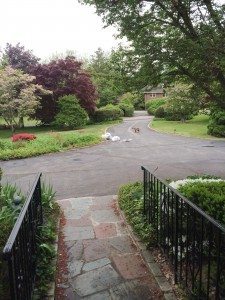 Even though concerns are rife and several alleged coyote photos were sent to the Record, so far none have proven to be photos of coyotes wandering in Great Neck. The photos taken in Great Neck Estates and Kings Point residential areas have been identified as long time Great Neck residents, the red fox, according to Frank Vincenti, known as “the fox man.” Vincenti, who heads the nonprofit Wild Dog Foundation, headquartered in Mineola, studied these supposed coyote photos and told the Record that the fox looked different than usual since, at this time of year, the fox and the coyote moult and shed thick winter coats and look disheveled. Vincenti said he does not suspect mange in any of the animals in the photos he saw.

“The fox man” has noted several times that “red foxes have long been settled in Great Neck…frequently sited, often in the northern end of the peninsula…often mistaken for a coyote.” Vincenti added that, unlike coyotes, the red fox are “no threat to people or pets.” And although there have been fairly recent coyote sitings in Manhattan and Queens (as well as the Bronx and Westchester), Vincenti did advise, though, that residents should never feed any wild animal and food should never be left around outside.

Vincenti previously told the Record: “For coyotes to establish a home in Great Neck would be difficult; coyote families appear to be traveling east from the city areas and, if seeking a new home, would travel along a ‘corridor’ such as the Northern State Parkway. Northern Boulevard would not be a coyote route from the Alley Pond area; the animals would be more likely to travel along the wooded Northern State, bypassing Great Neck.”

Recent photos thought to show coyotes wandering Great Neck neighbors that have so far been identified as red fox, but also at this time, a biologist partially sponsored by the Museum of Natural History is also in the midst of conducting research regarding the possibility of coyotes roaming in Great Neck. Chris Nagy is the director of research and land management at Mianus River Gorge in Bedford, New York. He is working on a research project, Gotham Coyote, that is tracking the spread of coyotes’ territories in metropolitan New York. His eventual conclusions will be reported in the Record.

Photographs have been sent to the Record from homes on Martin Court in Kings Point and on Cedar Drive in Kings Point. The Cedar Drive resident contacted the Great Neck Estates Police, as a recent Nassau County advisory told people to call the police should they spot a coyote. Great Neck Estates Police have not spotted any coyotes, but are on the lookout. The Town of North Hempstead Public Safety Commissioner has not seen any coyotes in the town and Great Neck Park District board of commissioners chairman Robert Lincoln also reported no local sightings. Lincoln did say that the parks, like the large, open Kings Point Park are carefully watched and a coyote has never been seen in those woods; he was well aware of frequent red fox roaming these areas.

Other as yet unidentified local coyote sightings include a couple running in the early morning hours on Kings Point Road, residents believing they saw a coyote outside their home west of Bayview Avenue in Great Neck Estates, a man driving home at dusk in the Strathmore area, a Forest Row residents “eye-to-eye” sighting outside of his home (the animal stared for about 30 seconds and then walked off), a Cedar Drive resident who saw a “hungry looking” animal going through trash in his backyard several times (and it took a lot of noise to get rid of the animal) and a woman on Martin Court who also captured photographs of an animal going through her trash.

Meanwhile, with documented coyote sightings as close as Queens and Manhattan, caution is advised. Previously distributed information from Nassau County includes: call 911 should you encounter a coyote; never leave food outside and available to wild animals; keep garbage inaccessible to any animals; keep private property fenced in; and keep small animals inside. It is never a good idea to attempt to approach any wild animal.