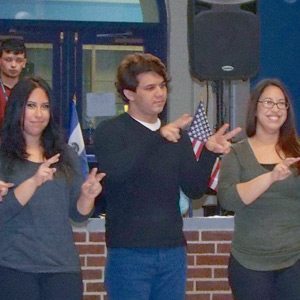 The collaboration of several school clubs featured the participation of more than 65 students who contributed songs, dances and demonstrations from countries ranging from Trinidad to Brazil to China and more. Following the performances in the school’s packed cafeteria, students and audience members were treated to a smorgasbord dinner of foods from many different countries prepared by parents and other volunteers.

International Night was produced and coordinated by Susanne Marcus, North High English-As-A-Second Language teacher, who developed the concept as a classroom project in 2007. “It started as an ESL assignment for my students about international dreams of peace,” said Marcus, who is the current president of the New York State Teachers of English to Speakers of Other Languages (TESOL).

“My students had to write reports on a leader of non-violence that they admired from their own country,” she explained. “They had to speak about them and we invited parents to sit in the classroom.”

Of unusual interest was a demonstration of Capoeira, an ancient Brazilian form of martial arts, by William Cadete, and a traditional Chinese dance by Catherine Cao, Amber Chen, Cindy Shen, Anita Zhang and Ruth Zhang that incorporated rap music.

Cindy Shen also combined with Regina Chan to engage the audience to participate in its Tae Kwon Do demonstration. The girls invited several students to hold wooden boards for them as they took turns breaking them with their hands and feet. Chan then taught several volunteers how to safely break the boards themselves.

The show concluded with a student group singing “We Are The World” in French, Spanish and English and inviting the audience to join in on the chorus.

“This is the tip of the iceberg,” Marcus added afterwards, in referring to the benefits of having students learn about different cultures and their customs. “This is the way to start a conversation. It’s about accepting different ways of viewing the world. If, for example, you’re going to eat foods from different countries, it’s so important to have a conversation about the foods’ origins, the ingredients and the history and memories that they evoke.”