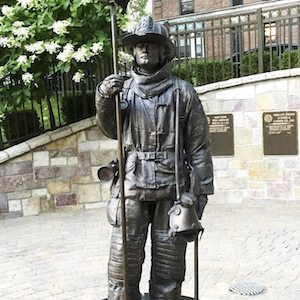 “It’s a hard question,” a teary-eyed Anne Ielpi responded when she was asked what she remembered most about her son, Jon,
who died responding to the 9/11 attacks 14 years ago when he was both a New York City firefighter and assistant chief with the Great Neck Vigilant Engine and Hook & Ladder Company.

Ielpi, surrounded by family and friends and over 20 uniformed members of the Vigilant unit, was in the park last Friday morning on Grace Avenue in the plaza, often referred to as “Jon’s Park,” to participate in the annual 9/11 memorial service.

She was one of the first to arrive prior to the ceremony and frequently exchanged numerous hugs and well wishes from many of the guests as they arrived, including Nassau County Legislator Ellen Birnbaum.

But Jon’s mother, who retired last year after almost 30 years with the Great Neck Park District, did recall his sense of humor and fondness for practical jokes.

Family friend Jon Lyons, the former chief of the Sea Cliff Fire Department, was standing next to Ielpi and stepped in to describe a humorous incident involving her son just prior to 9/11. “When I was chief we had a big fire on Sea Cliff Avenue and he called me on the radio because he was assistant chief here (with Vigilant) and he asked me if we needed any help.”

“I said ‘Yeah, come on and give me a hand.’ When the fire got written up in the paper they said that the fire was so big that we had to go to Great Neck to get help because they saw his Vigilant car parked out front. But that really wasn’t the case. We had it handled.”

Current Vigilant Chief Josh Forst, who hosted the 9/11 memorial ceremony, also knew Ielpi well, who was 29 when he died. “He was one of my closest friends,” said Forst.

“He was a phenomenal chief,” Forst continued.  “It’s very difficult being a chief and having two kids like he did at the time and it was difficult to be at everything, but he was. He was at almost every drill. He was constantly trying to train the new members and he was a terrific fireman. And you always knew that when Jonathan was there, everything was going to be OK.”

Standing in front of the statue of Jon in Firefighters’ Park, Rabbi Marim D. Charry of Temple Israel (and a member of the Vigilant Company) began the service with the invocation and paid tribute to all those who had fallen in the attacks. The statue, dedicated in 2003, salutes not just the heroes of 9/11 but “Great Neck firefighters and medics who have made the supreme sacrifice while unselfishly keeping communities and their residents safe.”