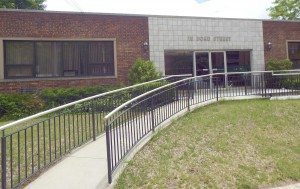 It might just come down to how officials in Great Neck Plaza will interpret what constitutes a “story” when it comes to counting the number of stories that an apartment house in the village may legally have.

The village’s code for Residence D District (apartments) restricts buildings to “three stories with a maximum height of 45 feet” and that’s central to the variances that the owner of 15 Bond St. is seeking in redeveloping the property that extends from Bond to Park Place and is what residents of nearby and adjoining buildings are so concerned about. The property is in the Residence D zone.

In a public hearing last week before the Plaza’s zoning board of appeals, Paul Bloom, attorney for 14 Park Place LLC, which is proposing to build a four-story 61-unit luxury rental building on the property that now contains a one-story medical building, a two-family home and a parking lot, spoke for almost 90 minutes on behalf of his client.

Much of Bloom’s presentation focused on his contention that several variances be granted because at least nine pre-existing neighboring three-story buildings actually had four residential stories and that there were two buildings across from the property (12 Bond and 4 Maple) that had at least six stories (over 70 feet high). Those two buidings are in a different residence zone.

Because of the physical presence of those buildings, he maintained that his client’s project would clearly be in keeping with the character of the neighborhood.

Attorney Chris Prior, representing residents of 21 Bond, 4 Maple and 22 and 25 Park, disagreed with Bloom’s arguments and, in fact, stated that the building proposed would be 58 feet high, not 45, due to a structure planned for the roof to house amenities for the new residents.

Bloom, speaking before the five-person appeals board chaired by Faith Cleary, brought up the case of 22 Park Pl. and claimed that it was no longer a three-story structure, as a 2007 zoning board decision gave the owner permission to convert some space on the first level to residential, which is set slightly below curb level.

Bloom gave examples in which buildings had been allowed to convert space in such instances where office space was not being used, superintendent apartments expanded and rooms containing mechanical equipment were no longer needed.

The village code also states the following: “Height in stories of a multiple dwelling does not include basements or cellars which are wholly below the curb grade. Any habitable area of such a basement may be used for a superintendent and/or porter’s dwelling unit only.”

“What made this a four-story building, based on your decision,” said Bloom, referring again to 22 Park Pl., which borders the 15 Bond property on the north, “was a change in use which then made the first floor, which, by the way, is a ‘story’ based upon your code, to be counted into a habitable area.”

Chairperson Leary, who signed off on that variance in 2007, defended the board’s similar granting of variances to other three-story buildings and did not agree with Bloom’s reasoning. “You’re presenting us with a totally new project,” she countered. “You should persuade us of the value of that project.”

“I understand how you did your research,” she continued. “We never blessed it and said ‘now you’re a four-story building (regarding previous variances granted).’  We tried to help the owners and occupants of the buildings.”  Leary’s statement was applauded by most of those attending in the filled-to-capacity village hall.

Prior also disagreed with Bloom’s logic stating, “The definition of ‘story’ in your code expressly says that the first story of a building starts with the first floor that’s entirely above the curb level.”

“So any variance that this board granted for other buildings allowing the conversion of space inside a building to become a habitable space does not create a ‘story’ or call something that’s not a ‘story,’ a ‘story,’ Prior contended.

Prior complained that because the 15 Bond owners had changed the project plans so often he had no complete up-to-date paperwork. He said that complete plans were a necessity so that they could be presented to and analyzed by his clients’ own consultants.

Village counsel Richard Gabriele said at the meeting that there would be many other opportunities for the public to be heard at both regular trustees’ meetings and Appeals Board meetings before any final decision would be made.

Bloom’s client was scheduled to continue its request for a Permit of Compliance and Site Plan Review from the Plaza’s board of trustees, at its own meeting, just after the Record went to press.