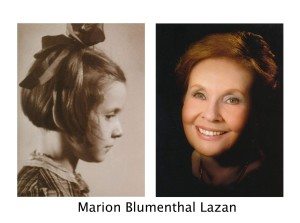 Hear the captivating story of Marion Blumenthal Lazan, a child survivor of the Holocaust, on May 4 at Great Neck Synagogue.

Lazan was born in Bremen, Germany, and has dedicated her life to educating the public about the Holocaust—especially students. She is an inspirational speaker who shares her moving firsthand account of the devastating years that shaped her childhood. She will discuss her award-winning memoir, Four Perfect Pebbles: A Holocaust Story, coauthored by Lila Perl. She will talk about her family’s life in Germany from the events preceding Kristallnacht to imprisonment in Nazi concentration camps to liberation in April 1945. Lazan was 11 years old when the family finally gained its freedom.

Following Hitler’s rise to power, the Blumenthal family, including Lazan, her father, mother and brother, Albert, were trapped in Nazi Germany. They eventually managed to get to Holland, but soon after, Holland was occupied by the Nazis, too. For the next six-and-a-half years, the Blumenthals were forced to live in refugee, transit and prison camps that included Westerbork in Holland and the notorious Bergen-Belsen concentration camp in Germany. Lazan was only 9 years old when her family was sent to Bergen-Belsen in February 1944. Though they all miraculously survived the camps, Walter Blumenthal, Lazan’s father, succumbed to typhus just after liberation.

It took three more years of struggle and waiting before Lazan, Albert and their mother obtained the necessary papers and boarded ship for the United States. Their story is one of horror and hardship, but it’s also a story of courage, hope and the will to survive.

Lazan’s presentation goes beyond the facts. She asks her audience to be tolerant of others and not stereotype individuals based on religious belief, color, race or national origin. She stresses the importance of positive thinking, as well as creativity and inner strength. She warns her listeners to be true to themselves and not blindly follow a leader. Her story is one of perseverance, determination, faith and hope.

Since 1979, Lazan has spoken publicly about the Holocaust to more than one-million students and adults in public, parochial and private schools, colleges and universities, church and synagogue groups, and civic organizations across 37 states in the U.S. and internationally in Germany, Holland, Israel and the UK.

Many schools are using Lazan’s memoir in the study of the Holocaust. Four Perfect Pebbles is in its 27th printing with more than 500,000 copies in print, and has been translated into Dutch, German and Japanese, and will appear in Hebrew soon.

Lazan has been designated a New York State Senate Woman of Distinction and was honored by the New York State Regents Department of Education with the Louis E. Yavner Citizenship Award. In November of 2010, a new public high school in Germany was named in her honor for the positive influence she has on young adults.

She lives in Hewlett with her husband, Nathaniel, and they have three married children, nine grand-children and one great-granddaughter.

Students and adults of all ages are welcome to attend this very moving evening on Wednesday, May 4, at 8 p.m. at Great Neck Synagogue, as Lazan allows attendees to become witnesses to her firsthand account of the Holocaust. Afterward, Lazan will sign copies of her book, which will be available for purchase.