After graduating college, most young adults are confronted with two options: find a job or apply to graduate school. Jason Hoffman, a lifelong Great Neck resident and recent graduate of the University of Missouri, chose differently. He decided to ride a hot dog on wheels across the country instead.

The college he attended is one of a few schools in which Oscar Mayer, the classic American company whose name can inspire anyone to sing their catchy theme song at the drop of a hat, recruits recent college graduates to become “hotdoggers.”

“[Hotdoggers are] brand ambassadors for Oscar Mayer, and we travel the country doing marketing and promotional events. We go to supermarkets, sporting events, festivals, parades and we’re generally in a different city every week…we’re just trying to spread miles of smiles,” said Hoffman, grinning.

“I thought the opportunity to see the country, while representing such an iconic brand, would be something that you can’t pass up. It’s a one year tour with them, so right out of school, you know, you get to see the country,” Hoffman explained. “It’s really an unbelievable experience and you get to meet so many interesting people and see so many interesting places all while representing one of the five largest food companies in the United States…it’s a great experience.

“I’ve been to 23, maybe 24 states. How the program is done is all regionally, so there are six vehicles for six different regions,” Hoffman explained while sitting in one of the passenger seats of the mobile. He rode around the southeastern U.S. for the first six months, and is now touring the northeast until June.

These hotdoggers not only get to hit the road for a full year, but they do it in style—driving the infamous Oscar Mayer Wienermobile all the way across the country. Designed in the shape of a hot dog with bright colors and the brand name emblazoned on the side with its traditional red logo, the Wienermobile is hard to miss or ignore.

“The beauty of driving this [Wienermobile] is that everyone is smiling and waving at you…you can’t go anywhere without people taking pictures and waving, and it’s great because we interact with thousands of people a week and everyone’s happy when they see us. What other job or interaction can you have when, no matter who you’re seeing, everyone’s happy to see you?”

As Hoffman talked inside the stationary Wienermobile in a parking lot next to Great Neck North Middle School, the windows afforded a view of people stopping and staring, getting out of their cars to smile, laugh and take pictures of the larger-than-life hot-dog car. 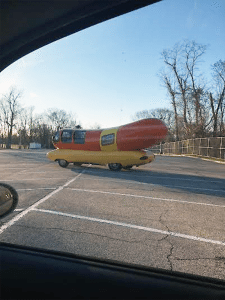 “My favorite place to go was New Orleans, it was a lot of fun and obviously New Orleans is a city that thrives on different, and this is certainly different,” he continued, adding that one of his favorite events of his entire experience was driving in the Pride parade in Chicago last summer, waving at the millions of people who attended while riding up top of the vehicle in the sun roof (or the “bun roof,” as he calls it).

Since having the Wienermobile arrive in a town or city is an event in of itself, what else do the hotdoggers do to engage the public? According to Hoffman, it depends on the season.

“This past summer we had a virtual reality ride, now that it’s a little colder we have it [the Wienermobile] open and let people inside so they can check it out, we give out the iconic weenie whistles…we play games. This past weekend we were in Cleveland and we had postcards that we would hide of Oscar Mayer products. If kids found the postcard, they could bring it back and get a prize.”

With a painted sky-blue ceiling that reflected the cold but beautiful day outside, bright yellow and red seats—reminiscent of the two preferred condiments for hot dogs, mustard and ketchup—and a container filled with Oscar Mayer Weenie whistles, it’s a delicious treat for anyone to step inside and see the mobile from the inside out.

Hoffman was born and bred in Great Neck, attending both North Middle and North High School, and seemed very happy to be back home to visit his family and friends before going back out onto the open road.

When asked how his parents felt about their son driving around their hometown in the Wienermobile, Hoffman laughed and said, “They were hesitant at first to have their son drive a hot dog around the country for a year, but it’s such a great experience, and to get to see so many places you wouldn’t otherwise go…it really is a fantastic stepping stone, first job out of school you get to network with so many people, [and] I can use that when I’m looking for my next job.”

Since he began traveling, Hoffman was able to return home once before, but this was his first time back in Great Neck with the Wienermobile in tow. “It’s really fun to drive around town and see some people you know, see a lot of people I don’t know…it’s a lot of fun to be home with it.”

Anyone interested in becoming a hotdogger should visit www.oscar mayer.com/wiener mobile and complete an online application. And if you see the Wienermobile driving around Great Neck, make sure to honk and wave at Jason Hoffman.