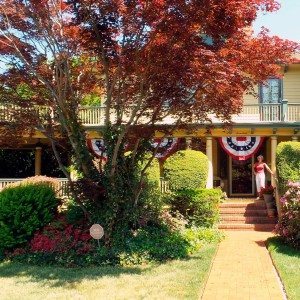 Gloria and Norman Gersman always had an interest in antiques. So, when they had the opportunity to purchase a Great Neck house that dates back to the early 1900s they jumped at the opportunity.

The house, at 17 Arrandale Ave., needed extensive restoration to return it to its former grandeur. But their painstaking labor, lasting for several years, has made their house an anchor on the street of stately homes just off of Middle Neck Road, near Great Neck House.

Their 20-plus year effort to bring the house back to its original look was recognized by the Great Neck Historical Society at their annual meeting last week, when they received the organization’s first Outstanding Restoration Award. The Historical Society’s annual meeting also reviewed the group’s accomplishments during the past year, including conducting an awareness campaign throughout the North Shore to draw attention to the condition of the Stepping Stones Lighthouse, their first walking tour of a part of the peninsula and bringing the history of Great Neck to many area organizations as part of a “speaking tour.”

“Great Neck has a very graceful past,” said Kasten. “It is so gratifying when somebody cares enough to bring back a part of it.”

On hand for the presentation of the award, in addition to Mr. and Mrs. Gersman, was the daughter of Elaine and Saul Kessler, the previous owners of the house.

The house sits on a plot that is three-quarters of an acre and is 312-feet deep. The property includes a carriage house, originally for horses, which has a basement and a second floor covered in mahogany. Extensive shrubbery on the grounds includes many large timeworn trees.

A wrap-around porch flanks the outside of the house. Once shaky, its restoration included four-foot deep cement footings. Each of the many railing pieces were removed, stripped of years of paint and wear, and restored by Mrs. Gersman, a process that took considerable time and dedication.

A 1910 U.S. census lists many houses along Arrandale Avenue, but Nassau County records show that the house was built in 1912. The original owner of the Victorian Queen Anne-style home was Mary and J. Fred Faigle, a prominent Great Neck resident, owner of the former Faigle’s Meat Market on Middle Neck Road, and a director of the Bank of Great Neck. The house was sold by the Faigle family in 1952 for $23,500, and sold again in 1965 to the Kesslers. The Kessler family sold it to the Gersmans in 1994.

Soon after moving in, the Gersmans went to work restoring the handsome oak woodwork inside the house, which had been painted black by a previous owner. In addition, they removed carpeting to reveal beautiful oak flooring, which they also restored. They carefully painted the former dining room, which still has the original plate rack surrounding the walls.

Their greatest challenge was deciding what color to paint the exterior of the house. Their research consisted of multiple trips to Cape May, New Jersey and to Sea Cliff to see what color homes of that period were painted. They finally decided on a mustard yellow, with accents of dark green and red.

“We knew from the moment we saw our house that this was the one for us,” Mr. Gersman said. “I would like to see more older homes preserved.”

Kasten said she agrees. “Arrandale was once a street of handsome Victorian homes. I like the link to our past and this house typifies it.”