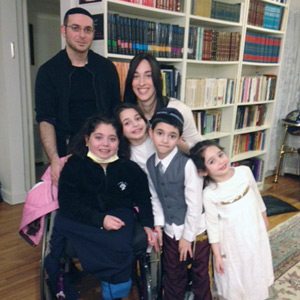 Little Sara Bezilay of Great Neck received a great surprise, a real helping hand from college students she did now know, until, suddenly, there was help for the very sick 7-year-old. Students from Stern College came forward by choosing the little girl through a class project.

Rob Longert teaches a class at Stern College called “Social Media to Drive Business Results,” teaching how to use targeted social media to achieve concrete results. For the students’ final project, the class unanimously decided to try to raise money for a charitable cause. Their idea turned into a fundraiser to raise $4,000 for a sick child, Sara Bezilay of Great Neck. Sara had contracted swine flu at age seven and consequently had to undergo major heart surgery, a leg amputation, and much more, as a result of the illness.

The class plan was to use the money raised to renovate Sara’s home bathroom to make it wheelchair accessible. They used the tips they learned in the social media class to design the pitch.
The campaign went live just recently and they met their original goal in only about one hour. They then extended the duration of the program and subsequently they made $3,000 in one two-hour class session.

After such great success, and so much money raised, the students further extended the deadline until May 14, with the ultimate goal of raising $24,000. At press time, they were already at $22,350, after raising $14,000 during the previous day.

The Bezilay family now has brought in a design specialist to create a comprehensive makeover for the entire house so that Sara can live comfortably.

The campaign is now trending on the popular crowd funding site, Indiegogo: hhttps://www.indegogo.com/projects/open-hearts-open-doors.

When asked why Great Neck’s little Sara Bezilay was chosen, students found her a quick and wonderful choice. Liran Weizman, one of the students in Professor Longert’s class, had met Sara at Columbia Presbyterian Hospital in New York City, where Liran was serving as a volunteer. After her time at the hospital, Liran continued to stay in touch with Sara and her family. When the college class came up with their year-end project, and Liran told them about Sara, the class selected this sick little girl because Sara was not receiving help from any kind of organization.