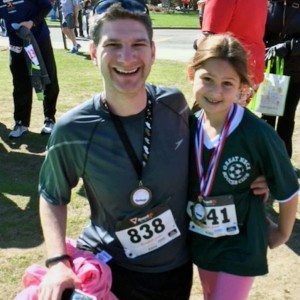 When the inaugural Suffolk Marathon in support of veterans sets off on Sept. 13, Great Neck’s Stuart Burkhoff will be ready to go, among the runners. Along with the marathon, the event also boasts a half marathon. The races will raise funds to expand and enhance veterans’ services in Suffolk County. It also is a last-chance qualifier for the Boston Marathon.

Burkhoff, a Lake Success resident, along with his wife and young daughter, has already run three marathons. But, running has not already been a lifelong experience. “I was not a runner growing up, quite far from it,” Burkhoff explained. As a youngster he was asthmatic and out of shape. “I started running as a challenge to myself and three marathons later, I now run to inspire my daughter and educate her on the importance of exercise. Burkhoff says that he believes running is a “great activity” that he can do together with his daughter. And now he looks forward to having her cheer him on at the Suffolk Half Marathon.

The Suffolk Marathon has a distinctly planned route that was designed to showcase and drive tourism toward downtowns along the Great South Bay. The race will begin and end at Heckscher State Park in East Islip with a Taste of Long Island Festival, featuring local craft breweries, award-winning wines and local food. Suffolk County has partnered with New York State to host this inaugural event. The festival will also feature live musical entertainment.

“The Suffolk County Marathon is a mechanism to highlight the incredible communities, natural resources and businesses we have here in Suffolk County,” said Suffolk County Executive Steve Bellone, who is also running the marathon.

For some race participants, the Suffolk Marathon is their first full marathon, while other registrants have been competing in marathons, tough races and triathlons for years. Runners from around Long Island and beyond are participating, including wheelchair and hand cycle competitors, veterans and supporters of veterans, as well as many others eager to enjoy Suffolk’s natural beauty and participate in the inaugural race.

North Shore-LIJ Health System has been named as a presenting sponsor.

The Suffolk Marathon is part of the veterans series of races that began May 23.

The marathon is managed by the Greater Long Island Running Club at: www.glirc.org

To learn more about the Suffolk Marathon or to register, visit www.suffolkmarathon.com.