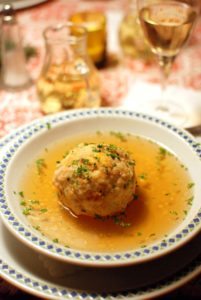 The highlight of my family’s Passover dinner is matzo ball soup. The knaidelach, as my grandmother called them, float in the sweet nectar of chicken soup, awaiting their turn to be devoured in the long list of dinner courses.

The air is perfumed by brisket and kugel—but nothing else is as anticipated as matzo ball soup. The guests listen to the Seder. Their appetite is intermittently teased by little snacks pointed to in the Haggadah; like charoset spread on matzo, other tidbits from the Seder plate and hard boiled eggs. The family waits patiently—salivating at the thought of the question from the kitchen—“will it be one ball or two?” But, not yet. The gefilte fish has to have its moment of glory. The horseradish is waiting to make guests’ eyes tear and noses run.

Once the first portion of the Haggadah is completed, we take a break. At last. Out comes the soup course. Bowls are passed around the table. One has three balls—it’s probably my son’s. He waits all year for this treat. When all the guests are served and the children at the smaller table start slurping their soup, there is no conversation; all is quiet except for the humming, clanking spoons, smacking lips and sounds of contentment.

Some like the chewy kind of matzo balls; others like them light and fluffy. It’s a matter of taste. In my family, you don’t hear complaints. You only hear, “Are there any more?”

Aunt Esther, our family’s queen soup maven, has passed the baton to the younger generation. Ruth has taken over and makes a delicious chicken soup, devoid of fat and loaded with veggies. The matzo balls are flecked with parsley and wait to be dropped into the warm soup. YUM!

Sated by the anxiously awaited soup, we all relax and enjoy the rest of the meal.

The table groans from the weight of Rich’s famous brisket and plentiful vegetable concoctions. The glorious kugel is no slouch. When we can no longer breathe, with buttons bulging and much concealed belching, out comes way too much dessert, just in case there wasn’t already enough food.

The dining table was never large enough to accommodate everyone as the family grew, so the smallest children were exiled to the children’s table amidst lots of grumbling. When a seat at the big table was vacated by a college student who was unable to leave campus to attend, a smaller kid moved into an adult seat.

Soon enough, there were fewer guests at the Passover table and the small table was eliminated; the kids got too old to search for the hidden afikomen; and wallets were opened for the young adults to divide up the reward for finding the supposed hidden matzo, which was now lying inside a napkin on the table.

In the last few years, there have been signs of a sea change. The older children are bringing home boyfriends, girlfriends and classmates. I can see the future. The children’s table will be revived and the children’s children will be complaining, “Why do we have to sit here?”

Times change, we all get older, but we will always have matzo ball soup.