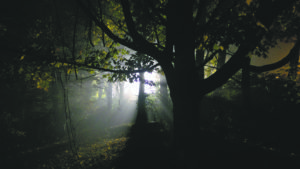 While a bastion of history and education during the daylight hours, the nighttime air of the fast approaching All Hallow’s Eve season sees Old Bethpage Village Restoration transform into an altogether different beast—one of darkness and desolation.

For the fourth year in a row, the Old Bethpage Village Restoration—Nassau County’s living history museum that provides visitors the opportunity to experience authentic 19th century Long Island life—has employed the masterful idea of using its one-of-a-kind setting as a basis for an equally-unique Halloween attraction, dubbed Haunted Tales.

“I think people know that when you’re coming here, you’re not just getting one thing and that’s it,” said Kenny Arena, who works on events at the Restoration. “At some of these other haunted houses they have on Long Island, it’s just one house. They’re cool, but here, for just 25 bucks, you have a few hours of entertainment.”

Garishly-colored lights everywhere paint a nightmarish evening landscape, punctuated by eerie pathways lit only by oil-burning smudge pot lamps. Within the numerous period-style homes throughout the Restoration, dastardly dedicated actors await to play out horror to the delight of those who live for all things dark and foreboding.

Arena is but one of many people involved in the collaborative effort of turning the museum’s expansive grounds into a haunt that even the late, great Vincent Price would be proud to call home for a spell. He noted that a new approach was taken with this year’s Haunted Tales in order to keep things fresh for attendees who had “survived” last year’s event. 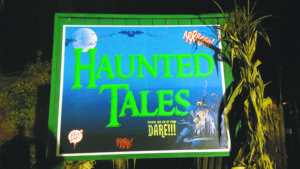 “What we did differently from last year is that all of the skits that are happening in the houses are completely new. We actually hired a scriptwriter and we told him to think of some haunted, spooky, scary tales that would fit into the mold of what the village is,” he said. “For example, in one of the houses we have a Jack the Ripper skit; up in the church they’re doing an exorcism; and while Lizzie Borden is returning from previous years, we have another new skit called ‘The Bride Wore Black,’ which is a really good new edition.”

“In addition to the haunted house that we had last year in the village’s Lawrence House, this year we have a new haunted house in the barn located behind the Schenck House,” he said. “It’s actually a big old barn used for storage and we saw it one day and thought it would be a really cool spot for a haunted house.”

Another noteworthy new addition is an increased presence by members of the Coney Island Circus Sideshow. Their limited inclusion in last year’s event went over big with attendees, who were wowed by off-beat performances including sword swallowing and an audience-participation magic show.

“Last year, I honestly don’t know how it came to me, but I just said how cool would it be if we had a circus freak show?” Arena said. “I went online, looked them up, and made some phone calls. After it was such a hit last year, I immediately asked them to come back every single night this year. So we set it up, and they’re doing two shows here every night. And they love it here, it’s great.”

Workers from the Tackapausha Museum and Preserve in Seaford were on-hand, giving demonstrations to attendees of various nocturnal animals that prowl the night, such as owls, snakes and opossums. No vampire bats, however.

When the horrors eventually prove to be too much for the mere mortals walking about Haunted Tales’ trailways of terror, the warm glow of an always-burning bonfire beckons attendees for a quick toasted s’mores break before taking on the forces of the night once again.

Jason Bencivenga of Party Up Productions has been in charge of putting together Haunted Tales’ haunted houses for the past two years and noted that he and his staff really attempted to outdo themselves this year.

“It’s a big village, so we brought in a lot of props and we’re trying to keep things authentic while the same time which trying to have fun with it and go outside of the box, he said. “We turned the Schenck Barn into a slaughterhouse, and as for the Lawrence House, we’ve made it really overwhelming this year. When you go in there, you want to get right out.”

While their concentrated efforts were focused solely on making sure this year’s Haunted Tales runs smoothly and horrifically as possible, Arena did say that he had a few ideas brewing in the back of his dark subconscious for next year’s event.

“I really love our inclusion of a scriptwriter this year and how he came up with all of these awesome ideas,” he said. “Next year, we’d like to get a whole new set of scripts to make the experience fresh for people so they want to come back, because they’ll know next year it’s going to be something completely different. That’s what people are experiencing this year—they’re coming and they’re realizing, wow, this is all new.”