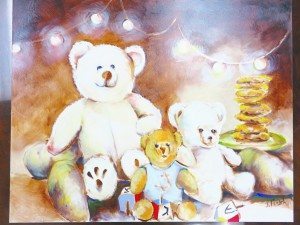 During each holiday season since 1997, John E. Hirsch’s Hanukkah paintings have been published in the Great Neck Record.

Currently, three of his works are touring in museums throughout the country, having been in the by-invitation exhibits Sexuality Spectrum and Who’s Hulda: Women of the Bible at the Museum of the Hebrew Union College in Manhattan from October 2012 through June 2013 and 2014 to 2015 respectively.

Hirsch began his artistic training in the art department of the University of Georgia. He received a BFA from the Ringling College of Art and Design in 1967, an MFA in Design from New York University Tisch School of the Arts in 1976 and a PhD from the NYU Graduate School of Arts and Sciences in 1988.

A longtime member of United Scenic Artists Local 829—the professional theatrical designers’ union—as a costume designer, Hirsch’s designs have been sent to productions from Soho to Broadway to Lincoln Center as well as various regional theaters, ballet and opera companies throughout the country. He is noted for his theatrical designs in Who’s Who in Entertainment.

Hirsch’s artwork has been shown in galleries throughout the country. The Great Neck resident was the featured artist in a solo exhibition held in January 1999 at the Shelter Rock Public Library and, in 1998, in New York City at the UAHC Gallery at 838 Fifth Ave. and in Great Neck at Fleet Bank, which is now Bank of America. His painting, “Utterly Charming,” was awarded an Honorable Mention at the Artist’s Network of Great Neck’s 1999-2000 exhibit at the Great Neck Library.

Hirsch has been represented in a number of juried group shows at the Woodstock Artists Association Gallery, the Great Neck Library, Jericho Library, Manhasset Library, the B.J. Spoke Gallery in Huntington and the Vincent Louis Galleries in New York City. His work has also been exhibited in group shows annually at the Elsie K. Rudin Judaic Museum at Temple Beth-El of Great Neck Members’ Salon Exhibits since 1999.

Hirsch was commissioned by the Union of American Hebrew Congregations Committee in 1989 and in 1991 to design HIV/AIDS quilt panels. A copy of the first quilt, entitled Tikvah, was used as an art poster, which was distributed internationally. The second quilt was reproduced as an art greeting card. The original quilts have been displayed throughout America as well as internationally, including in museums in Israel. 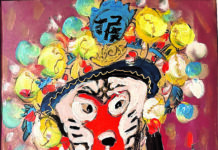