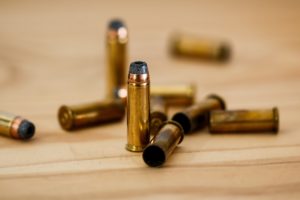 The cycle repeats, over and over again.

Ever since the 1990s, America’s gun culture has spiraled out of control. More and more shootings occur every year, and we seem powerless to do anything.

Well, the answer is explained in a quote by former talk-show host Michael Badnarik.

“Don’t even think about taking my guns,” said Badnarik. “My rights are not negotiable, and I am totally unwilling to compromise when it comes to the Second Amendment.”

Every time we get even the remotest bit close to getting somewhere, gun fanatics like Badnarik start going crazy over the Second Amendment.

So, we can’t take away the guns. But, the key point here is that guns don’t kill people—bullets do. And, if trying to take away guns won’t save lives, taking away bullets definitely will.

Bullet control was first proposed by former New York Senator Daniel Moynihan. He suggested a 10,000 percent tax on privately purchased bullets. His reasoning is explained in a New York Times letter to the editor “Instead of Gun Control, Try Bullet Control” by Larry Nessenson.

“Guns remain functional for centuries,” wrote Nessenson in the Dec. 20, 2010, letter. “If the private purchase of bullets is controlled, the stockpile of bullets will diminish over time.”

Moynihan was then quoted in a New York Daily News article “How About Some Bullet Control? Moynihan’s Idea Makes As Much Sense Now As It Did Then” by Harry Siegel. The Feb. 28, 2018, article said that most bullets are cheaper than cigarettes. We taxed cigarettes, and the smoking rate is down, lower than ever. If we tax bullets, the same effect would happen. Anyone can order thousands of rounds for less than $50. The 150 shots that tragically ended the lives of 17 people in Parkland cost less than $10. If we follow Moynihan’s plan, bullets would be harder to purchase, and a tremendous number of lives would be saved.

Taxing bullets isn’t the only way bullet control can be imposed. Currently, people can just about buy as many bullets as they want, and with the growth of online shopping, stockpiling bullets has become easier than ever. Hundreds of bullets can be purchased with a click of a mouse.

To further prevent mass shootings, we can limit the number of bullets people can buy at a time. Buying new bullets would also require proof that the old ones were used up. Additionally, bullets can be held at secure holding places at shooting ranges or hunting lodges for people who say that they need bullets for hunting or target practice. The funding needed to make these changes would come from the tax money on bullets. All of these ways would limit the number of bullets people could own and would reduce the risk of a catastrophic shooting.

The shooting crisis and gun mania in America needs to stop. And, if there is too much controversy over guns that we can’t do anything progressive, we need to start doing something about the bullets. Because, in the end, guns don’t kill people, bullets do.

Nicolas Liu is a seventh grader at Great Neck South Middle School. His mother, Linda Zhang, submitted this piece, saying, “This issue has been very much on the minds of our kids. Hopefully, their voice can be heard and effective measures be put into place in the near future.”