After successfully publishing three books of fiction, Great Neck South alumna Annie Dawid has reemerged as a poet with the publication of her first book of poetry, Anatomie of the World—and she attributes the nurturing of her passion to Great Neck.

In 1965, Dawid’s parents moved from their home in Queens to Great Neck for the quality of education offered at the Great Neck Public Schools. The author grew up on the peninsula and graduated in the Great Neck South High School Class of 1978.

Both her love for school and education comes from this town, and she said it was nurtured by a handful of excellent teachers within the district who encouraged her to pursue her passion. These teachers have left such an impact that Dawid has no trouble recalling their names to this day. She pays a special tribute to “Mrs. Marqusee, Marshall and Murdock at Cumberland Elementary School [in grades 1 to 3],” and said, “In high school, Annette Stern and Norman Walker prodded me into the world of study.” 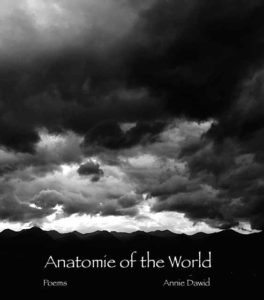 As for where her book of poetry began, Dawid notes that Anatomie of the World “was born long ago in the cultivation of love of learning which was bequeathed to me by Great Neck schools.”

In addition to writing fiction and poetry, Dawid also spends her time writing plays and essays, both drama and nonfiction. In 2013, she wrote a 10-minute play, which was submitted to a local competition in her small Colorado town.

“[The play] won and was performed there,” said Dawid. “Though [it was] not without controversy, as it touched on gun deaths and the subject of gun control following the Sandy Hook mass murder of schoolchildren.”

Her most recent work contains 13 poems. Though published in 2017 by Finishing Line Press, Dawid wrote the poetry in the 1990s when she decided to take a break from prose.

Anatomie of the World was highly influenced by John Donne, the great metaphysical London poet in the 1600s, who Dawid has been a fan of for quite some time. In fact, the title comes from one of Donne’s long poems entitled “An Anatomie of the World.” She noted, “I have used Donne in many of my works, prose and poetry, as he embodies for me passion and intellect seamlessly interwoven.”

The poems in Anatomie of the World cover a wide range of topics from love, homosexuality, the Holocaust and AIDS to a plethora of other subjects. Dawid’s poems highlight the contrasts between love and hate, as well as life and death.

Though these topics may sound diverse, throughout Anatomie of the World, Dawid links them together, mixing aspects that are political while remaining true to the literary components that are characteristic of poetry as she intertwines passion into her writing.

She brings to light the notion of emotion, which acts as the engine behind all these poems. Pieces such as “Anatomie of the World” perfectly encapsulate the compassion that Dawid has created within the novel, as it highlights the way in which life and death often coexist.

As for those who would like to read Dawid’s new book of poetry, she strongly encourages them to also listen to the recordings of Donne’s poetry read by the great Welsh actor Richard Burton and T.S. Eliot’s Four Quartets performed by the British actor Ralph Fiennes, which can both be found online.

Anatomie of the World is available at www.finishinglinepress.com/product/anatomie-of-the-world-by-annie-dawid.