Great Neck South graduate Alyssa Greengrass will be directing the Nassau Chamber Music Society (NCMS) in a concert on Sunday, Nov. 1, at 4 p.m. at Temple Beth-El of Great Neck. The concert will feature works by Haydn, Mendelsson and Mozart. General admission is $20 and students are $10. 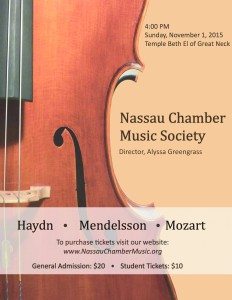 NCMS is a new nonprofit concert series founded by flutist Greengrass and “is dedicated to bringing the finest performances to the residents of Nassau County and the North Shore of Long Island,” according to the founder. Performing works ranging from the Baroque era to today’s modern composers, “NCMS concerts bring audiences together to fully indulge in the thrilling world of chamber music,” said Greengrass. 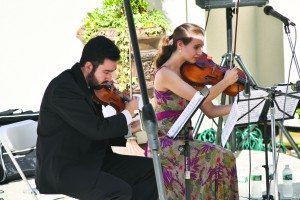 All the artists who perform with NCMS are colleagues and highly established and talented musicians. 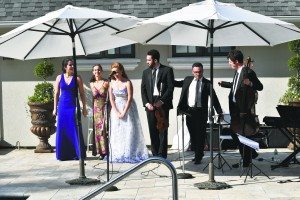 The New York City–based flutist enjoys a vibrant career as a performer and teacher. She has appeared in venues such as Carnegie Hall, Avery Fischer Hall and Alice Tully Hall and has participated in numerous festivals such as the Orford Center for the Arts, Pierre Monteux, Oxford International Flute Summer School and Brevard Music Center. A passionate teacher, Greengrass has presented numerous master classes and clinics for young musicians throughout the city and abroad. She maintains an active teaching studio in New York City and Long Island and is a Distance Learning Teaching Artist at Manhattan School of Music. Greengrass received her Master of Music from Manhattan School of Music and her Bachelor of Music from the Mason Gross School of the Arts at Rutgers University. Her principal teachers include Linda Chesis, Kaoru Hinata, Bart Feller and Amy Z. Cohen. 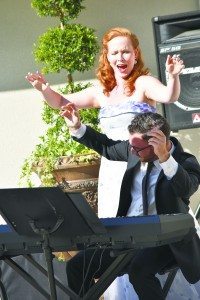 Greengrass said, “Growing up aspiring to be a musician, Great Neck was an incredibly supportive neighborhood to grow up in. I attended Great Neck South Middle School and High School, where I was blessed to be encouraged by inspiring teachers such as Alan Schwartz and Michael Schwartz.” She continued, “Having a strong arts program is not something that should ever be taken for granted and I know for a fact that the Great Neck community had a strong foundation that allowed me to continue to grow and expand as I advanced my studies.” Greengrass began the creation of the Nassau Chamber Music Society during her last year of graduate school at the Manhattan School of Music.