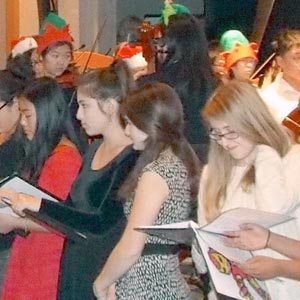 For Chairperson Michael Schwartz and his colleague, Dr. Pamela Levy, it’s all part of South’s long established “Music Community Outreach” program that has their orchestra, jazz band and choral groups performing at a different venue on almost a daily basis and sometimes even twice.

“We do anything that the community asks of us,” said Schwartz, who started the tradition of off-campus student performances when he came to Great Neck South 21 years ago. “If we get a call from Dr. Dolan, our superintendent, saying ‘could you possibly…? ‘ The answer is always ‘yes.’ If it’s something that’s going to help the district and support the community we’re going to do it.”

On the first day after the Thanksgiving break, for example, Schwartz, leading his orchestra and jazz band of 25 musicians, and Levy, conducting her 16 member chorus, said “yes” twice, making appearances at North Shore University Hospital and at a Make-A-Wish tree lighting ceremony in Lake Success within hours of each other.

Neither Schwartz nor Levy, who is in her 15th year at the school, could say exactly how many appearances their groups would actually make during this holiday season. But between upcoming appearances at a number of tree lighting ceremonies on the peninsula, visiting some of the other district schools and even a performance at a luncheon at Westbury Manor for the Great Neck Retired Teachers’ Association, “It’s a lot,” Schwartz admitted.

“We started this at the beginning as a formal way for us to go out into the community,” he explained, regarding the program that has been named Music Community Outreach. “The community supports us by passing the budget every year and supporting our programs in the arts. We, in turn, will go out and do what ever we can to support them.” Performances are not just restricted to the holiday season as both groups make appearances at senior centers and parades throughout the school year.

The hectic schedule doesn’t seem to bother the performers or Schwartz or Levy. “The kids love doing it,” said Levy, who lives in Great Neck and taught at Bayside High School in Queens before coming to South. “It’s not a chore for them. They absolutely love the opportunity. They love giving back. It’s very important to them. It gives them a good sense of community service. It’s wonderful for them.”

“I get tremendous satisfaction because we have wonderful students,” Levy continued. “I get to do so many different kinds of music with them. They love learning.”

Schwartz, who was recruited by retired Superintendent William Shine when the Syosset resident was in charge of the Manhattan public schools band program, and Levy also combine annually to produce an opera production, unique to most high school music departments.

Before she made an impact in the 2007 film Hairspray with John Travolta, Great Neck actress Nikki Blonsky participated in the opera program directed by Levy and Schwartz. Blonsky has since gone on to appear in several TV series and feature films. 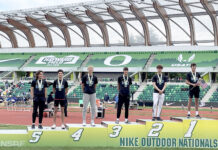 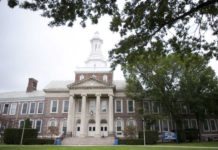