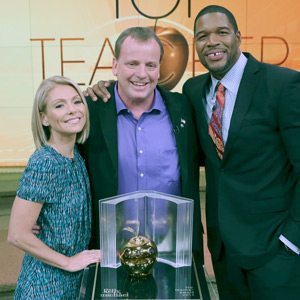 Great Neck’s own John Motchkavitz gloriously made it to the Top Five, one of the five “Teacher of the Year” finalists on “Live With Kelly and Michael” on ABC Television. The beloved lifelong Great Neck resident and chair of the Business/Technology Department at Great Neck South High School, recently appeared on the popular daily morning show … and he was a great hit! Friendly, likable and sincere, the handsome teacher, firefighter, 9/11 first responder and dedicated community volunteer was an instant success nationwide.

Motch’s appearance began with clips from South High, with students and teachers adding their kudos. South High Principal Susan Elliott said that Motch is “completely genuine, one of the most caring teachers … caring and motivating.” Sheryl Berger, who submitted the nominating letter (with other teachers in the department), called her co-worker one who “connects with every student.”

Even ‘Live’ co-hosts Kelly Ripa and Michael Strahan seemed genuinely impressed with Motch’s long list of community involvements, from his dedication to South High and his students, to his tough work as an Alert volunteer firefighter, to his teaching classes at his church, to the many hours he devotes to helping others. Also interviewed was our hero’s first grade teacher, who noted what a caring little boy John Motchkavitz was, even back then.

Obviously touched by the attention, Motch responded by saying: “If we all give back a little, the world would be a better place.”

Once back home in Great Neck, Motch told the Great Neck Record of the excitement on being on national television, from the limousine ride with family and friends to and from the show, to Kelly and Michael, “very real people … real New Yorkers.”

For all that he has done, for all that he will do, ‘Live’ presented Motch with 30 Intel Atom-powered Dell Latitude 10 Tablets for his school, South High. Motch received a personal gift, too — a week-long Alaskan luxury cruise for two, something the show discovered was high on his wish list.

And to top off all of this excitement, Motch was further honored by U.S. Rep. Steve Israel, who spoke about his constituent in the House of Representatives in Washington D.C.

As always, a modest man, a hard worker and a tireless volunteer, Motch is also a happy man. His advice to others? “Be happy in your life … make a difference.”

Home here in Great Neck, John Motchvavitz will always be a winner!