Since his early childhood, Great Neck resident Adham Sabry, who grew up in Egypt, has been immersed into the world of karate and it has remained a big part of his 25-year-old life.

“My earliest memory is probably when my father used to take me to karate practice,” said Sabry. “He was such a big part of molding me, and he really pushed me to get better in karate. He didn’t want me to just be somebody that does karate, but be the best that there was at doing it.”

Sabry has taken on his most fascinating challenge yet, as he is now a member of the new martial arts league Karate Combat. 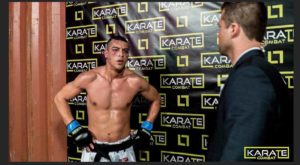 “It’s a gathering of people who play some of the greatest karate in the world,” said Sabry. “It’s different from regular karate. It’s a professional league.”

With 100 of the top “karateka” in the world representing 30 different countries, the league is the first of its kind. Each event involves fighters competing in three 3-minute matches that determine a winner by either knockout or decision. Sabry, also known as The Pharoh, is among the more prominent faces in the league and has been working to get better every day. 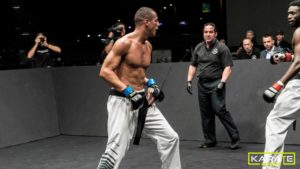 “Training is the number one priority to me,” said Sabry. “Over anything else, training is most important in getting your mind and body ready before any fight. If I’m not resting, I’m training.”

Sabry, who has won national titles in both Egypt and the United States, has competed in two fights in the professional league thus far. The first battle took place in April during the inaugural event in Miami Beach, where he was able to triumph over France’s Abdou Lahad Cisse. The second contest, however, was far more fascinating as it took place on the observatory deck of One World Trade Center in New York City. 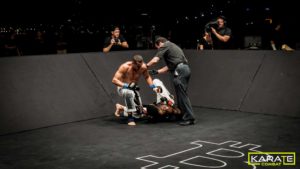 “I was really excited when I found out about it,” said Sabry. “It made everyone else really excited to watch it. It was a really good idea by [Karate Combat]. It was great for the league, because we want to shine.”

Unfortunately, while the experience as a whole was great, Sabry lost to Hungary’s Andras Virag in the Sept. 27 battle. Though he wasn’t happy about losing, Sabry saw some positives in his performance.

“I won the first two rounds,” said Sabry. “A punch in the last 20 seconds of the last round made me lose. Other than that, I was dominating the fight, but I will learn for next time. I asked for a rematch that will probably [happen] in January.”

While he waits for his next competition, Sabry works as an athletic trainer, helping people on the North Shore with their general fitness, especially those interested in karate and kickboxing.

“I have a group of people that help teach in Great Neck,” said Sabry. “We’re looking to open something up in the area for those interested in that.”