While the holiday season is a joyous time for most families, it’s just not that way for Great Neck Estates anti-gun violence advocate Lois Schaffer and her family, and it never will be.

It’s a somber time for the Schaffers, as Dec. 16 will always mark the anniversary of the shooting death of their daughter Susan in St. Louis in 2008 by two teenagers who invaded her home. But it also coincides with the one-year anniversary of the publication of Lois’ book about her daughter, The Unthinkable: Life, Loss and A Mother’s Mission to Ban Illegal Guns (Brown Books, $16.95). 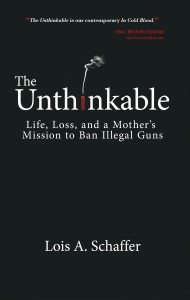 While Lois has been an activist for a long time and spoken out against gun violence even before her daughter’s death, the past year has been an interesting experience for her as she’s made numerous appearances in the metropolitan area on behalf of the book.  Her emotions have run the gamut from shock to frustration to hope, optimism and encouragement that gun violence can be substantially reduced.

Her most unnerving experience came last December in the Saddle Rock School auditorium in a conversation with a member of The Oath Keepers, a pro-gun organization that claims 30,000 members across the country. It came at the end of the evening’s raucous anti-gun violence forum sponsored by Reach Out America.

“One of them walked over to me and said, ‘I’m sorry for your loss but if your daughter had a gun she’d be alive today,’” she recalled. “I couldn’t believe that he was saying that to me.”

But there were many positives experienced during her yearlong circuit of appearances at bookstores, libraries, women’s clubs, religious congregations and youth groups.

“I was surprised when I spoke at the Syosset library,” she recalled. “There was an NRA (National Rifle Association) member there. He actually agreed with me that there should be background checks, that guns should be safely stored and locked and that he also didn’t agree with a major part of the NRA platform.”

“I met a rabbi when I spoke to a Westchester Reform synagogue,” citing another encouraging moment. “He called me later and said whatever it is you’re doing, keep on doing it. It’s wonderful. If I can do anything to help, you let me know.”

Her biggest supporters have been her husband of 57 years, David; her son Eric, who lives in Port Washington; and Alvin Glazier, who was her 48-year-old daughter’s partner at the time of her death in 2008.  There are six Schaffer grandchildren. Eric has three and Susan has three — Rachel (29), Daniel (24) and Sarah (22).

“But we’re all very proud of her,” he was quick to add. “This was an incredible effort that she put in. The way she’s followed up and the passion she’s shown for the cause of keeping our daughter’s memory alive and also fighting for sensible gun legislation, has been extraordinary.”

The Schaffers have kept in close touch with Glazier in St. Louis over the years and Glazier has led Lois to another interesting connection, Rabbi Susan Talve, who is the head rabbi of the Central Reform Congregation there.

Lois and the rabbi have had several meaningful conversations about the ongoing situation in Ferguson, Missouri, which is in the greater St. Louis metropolitan area. Talve, a well respected community leader, has impressed Lois with her work as a calming influence in the protests over the killing of an unarmed black teenager by a white police officer this past summer.

One of Lois’ most memorable meetings on her tour has been with the teenagers of the Andrew Glover Youth Center in lower Manhattan.  “I read a little of my book to them and talked about my daughter,” she said. “I asked these kids ‘How many of you know someone who’s been shot?’ More than half of them raised their hands.”

About her ongoing efforts to support curbs on firearms, she says, “The violence is getting worse. There are people who I talk to and tell me ‘you’re trying to climb Mt. Everest. It’s never going to change.”

“What I say to them is ‘look at Carolyn McCarthy,” in reference to the outgoing Congresswoman whose husband was one of six killed and 19 injured on the Long Island Rail Road in December of 1993 by a lone gunman. “She’s not going to stop. I’m not going to stop. If you can save one life, if you can make one change, you’ve done something.”