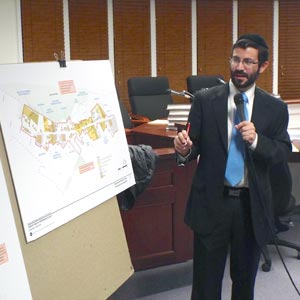 After four hours of presentations, conversations, praise, criticism, skepticism and a large number of “what-ifs”, both residents and officials of the Village of Great Neck have a lot to consider regarding plans to revitalize its downtown business district and residential areas.

Last week’s public meeting at Village Hall was actually held in two sessions, one at 5 p.m. and the other at 8 p.m. About 30 attended each session, including Great Neck Plaza’s mayor, Jean Celender.

The event was structured informally, with Mayor Ralph Kreitzman and the Board of Trustees declining to use the dais and choosing to sit in the audience with their constituents instead.

“This is a proposal,” said Kreitzman, after watching each meeting open with a presentation by Eric Zamft of VHB Engineering, the company hired to formulate the plan. “We’re not wedded to anything. We don’t necessarily agree with what our consultants are presenting. The purpose of this evening is to come up with our own individual thoughts. But we want to input from everybody. We want to hear what people’s concerns are.” Kreitzman repeatedly assured the audience that he and the trustees would carefully consider everything and move cautiously.

Residents showed major concern at the meeting over the impact on the Village’s services and character, including increased traffic, pedestrian safety, lack of parking, school capacity, fire safety and increased density of residences per lot.

The Board is considering changing the village code to accommodate suggestions in VHB’s plan. Consideration of these changes was to be continued at a public hearing on Dec. 3, after The Record went to press. The plan includes making some amendments to the Business A District, creating a new multifamily district on Middle Neck Road and a new town-home district on Steamboat Road. All of the suggestions are geared to significantly enhance the downtown by increasing the number of residences within walking distance of businesses and stores.

Steamboat residents were worried about the possibility that multiple town-home units would change the nature of the primarily single-family home street. In recent years, Steamboat has transitioned away from its previous commercial and industrial flavor. “We want to see what we think is appropriate for the village without changing the primarily single-family nature of our village,” said Kreitzman, in an attempt to allay some of the fears that were voiced. He also mentioned that the Village would be selling its 107×313-foot property on Steamboat in the coming year, which would free up more residential space.

Hooshang Nematzadeh spoke as president of the Great Neck Chamber of Commerce and also as a builder who owns property on Steamboat. “I want to applaud the vision that you have in removing the prohibitive zoning uses,” he said. “This is long overdue. This will help the stores to be filled.”

But he did express concern, especially in regard to parking and preserving the single-family profile.

“Currently the village requires one parking space per bedroom,” he said. “This is a very stringent requirement. If it remains in place, that would make it difficult.” Nematzadeh urged no more that two attached town-homes be allowed on any plot.

Another controversial topic was incentives. State law limits ways in which towns and villages can raise funds but allows municipalities to collect payments from builders in exchange for concessions. The money would go into a strictly regulated account that the village could use for improvements. Several speakers were clearly uncomfortable with this type of arrangement.

“Money could be used by the village to build additional parking or to do additional work on Middle Neck Road for upgrading and revitalizing the downtown area,” Kreitzman explained.” Anything that we would permit under the incentives is something we think would be good for the village. We’re not saying to the builders, ‘pay us a lot of money and we’ll let you build these monstrosities.’ We’re going to put limits on anything that can be done whether there are incentives or not.”